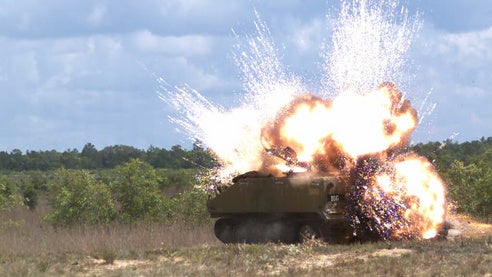 BAE Systems has received a contract modification from the US Army for the supply of additional lightweight handheld Laser Target Locator Modules (LTLM) to help soldiers determine target coordinates quickly and accurately in the battlefield.

The $23m contract extension awarded by the US Army Program Executive Office Soldier (PEO-S) follows the original $72m contract secured by the company for initial production of the LTLM systems in 2009.

LTLM programme manager Bill Ashe said the system provides mission-critical capability in a single, lightweight package, combining the functions of several pieces of equipment that are carried by the soldiers.

Utilising the latest targeting technology, Bae Systems’ TRIGR target location system enables soldiers on foot to identify a target location during day and night operations even in poor visibility conditions caused due to smoke or dust.

The lightweight, 17 micron un-cooled infrared module enables soldiers to geo-locate targets of interest at distances in excess of 4.2km in daylight and 900m in darkness, and can also help in rapid, accurate target data transfer to military networks to aid in target engagement.

Manufacturing work under the contract will be carried out at the company’s facilities in Lexington, Massachusetts; Nashua, New Hampshire; and Austin, Texas, US and initial fielding of units is scheduled to take place by the end of February 2012.