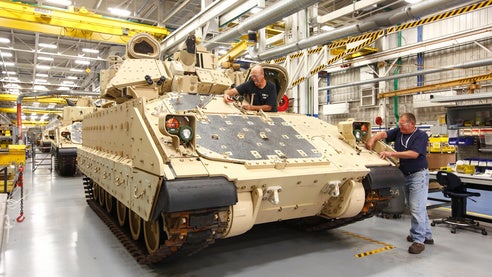 BAE Systems is requesting a base level investment from US Congress to prevent the planned shutdown of the Bradley industrial base production and supply chain from 2014 to 2017.

Based on the US Army’s current funding plan, the three-year closure is expected to result in serious long-term consequences for the army and taxpayers, in addition to loss of unique industrial capabilities, military preparedness, skilled labour and jobs across the country.

Representing a production and supply-chain network of more than 586 large, medium and small businesses from 44 states and the District of Columbia, Bradley industrial base supports to maintain the readiness of four out of five vehicles that are in service with the army’s Armored Brigade Combat Teams (ABCTs).

"The three-year closure is expected to result in serious long-term consequences for the army and taxpayers."

Sufficient investment by Congress in critical combat vehicle improvements and upgrades is being proposed by the company to help maintain the army’s combat capabilities and also bridge the shutdown gap.

The proposal includes survivability enhancements for the existing Bradley fleet and further upgrades to address US Army and National Guard requirements, as well as retrofitting the M88 vehicle to meet future battlefield threats and sustain its ability to keep up with and tow equipment, which is becoming increasingly heavier in the ABCTs.

In addition, the investment will maintain capabilities and skilled personnel of the industrial base, eventually eliminating the requirement to incur significant costs for restarting the manufacturing line, which is estimated to be approximately $750m.