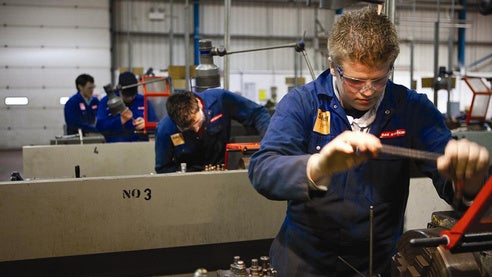 British defence contractor BAE Systems is planning to hire 387 engineering and business apprentices throughout its UK businesses, as part of the 2013 apprentice recruitment programme.

Representing the highest nationwide young recruit intake by the company since 2008, the scheme comes amid Prime Minister David Cameron’s recommendations to the domestic industry to recruit apprentices to accelerate economic growth through manufacturing, exports and infrastructure.

Primarily split among the company’s submarine-building, shipbuilding and military aircraft division, the three-year scheme guarantees a job to all apprentices at the end, with 10% joining the five-year higher apprentice programme, who are exempt from £9,000 annual tuition fees.

BAE Systems group managing director Nigel Whitehead said: "Our continued commitment to the apprentice programme reflects the sustainable position of our UK business and the success of the programme in generating BAE Systems’ workforce of the future."

"Our continued commitment to the apprentice programme reflects the sustainable position of our UK business and the success of the programme in generating BAE Systems’ workforce of the future."

Out of 387 recruits, approximately 144 will join BAE’s submarine-building business at Barrow-in-Furness in Cumbria, while its ship-building and naval support sites in Portsmouth and Glasgow will hire 105 apprentices.

Around 109 trainees will be assigned to the company’s military aircraft business at Warton and Samlesbury in Lancashire and its aircraft maintenance academy at Robin Hood Airport in Doncaster, Yorkshire; while 12 will join the Rochester-based Electronics Systems business in Kent.

The company’s cyber security business, BAE Systems Detica, is recruiting ten people at its Leeds office, while its munitions-production business and regional aircraft at Prestwick in Scotland will get four and three apprentices respectively.

Having one of the highest completion rates in the engineering sector, BAE’s apprenticeship programme trains 800-1,000 apprentices each year, with an investment of £80,000 for each recruit.

Apprentice training forms a critical element of BAE’s Skills 2020 programme, which aims to ensure the company remains competitive and operates successfully in the UK into 2020 and beyond.