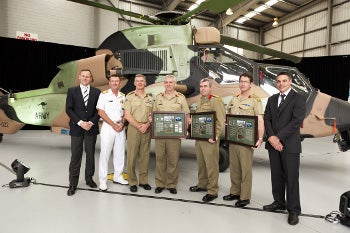 The delivery follows the $2bn contract awarded to Eurocopter under Project AIR 87 in 2001 for a total of 22 helicopters to replace the UH-1-H Iroquois gunship Bushranger and OH-58 Kiowa reconnaissance helicopters.

The first four helicopters under the contract were manufactured in France, while the rest were assembled in Brisbane by Australian Aerospace.

The lightweight, two-seat Tiger attack helicopter is a modified version of the Tiger HAP equipped with upgraded MTR390 engines and composite airframe to minimise weight and reduce radar cross-section.

The airframe is made from 80% carbon fibre-reinforced polymer and kevlar, aluminium and titanium that prevents heavy combat damage and also provides protection against 23mm autocannon fire.

The Tiger can carry a crew of two and uses roof-mounted sights for precise day and night surveillance and fire support missions.

Australian Aerospace CEO Jens Goennemann added that the company will continue to provide overall programme management and Through-Life-Support (TLS) including repair, modifications, crew training as well as upgrades throughout the service life of the helicopters.

The Tigers have been deployed with the Army's 1st Aviation Regiment in Darwin and the Army Aviation Training Centre at Oakey in Queensland and are expected to enter operational service next year.

The helicopter is also used in several different configurations by the armies worldwide including those in Germany, France and Spain.

The Australian Defence Force has signed a deed agreement with the company for the introduction of the MRH90 multi-role helicopter capability into service.