The US Army has awarded US hardware and software company Dynetics Technical Solutions a $351.6 million contract to produce Common-Hypersonic Glide Body (C-HGB) prototypes and act as system integrator.

The company’s agreement with the Department of Defence (DoD) will see it develop 20 glide body assemblies over three years. The prototypes will be supplied to the US Army, US Navy and the Missile Defence Agency. The contract also opens the door for the future production of more glide bodies.

Dynetics Technical Solutions president, Steve Cook, said: “We are honoured to be selected for this high-priority national security programme. Dynetics has been developing enabling technologies for many years.

“The common hypersonic glide body is a vital component in the National Defense Strategy that includes weapons with increased power. Our team is pleased the army saw that our highly-skilled engineers and technicians can bring this technology rapidly and affordably to the warfighter.”

The glide body produced by Dynetics is set to be used with a US Army prototype hypersonic weapon system that will be delivered to the US Army by 2023.

The US Army Rapid Capabilities and Critical Technologies Office (RCCTO) is spearheading the army’s push for hypersonic capabilities as one of the force’s main modernisation focuses.

The hypersonic system will be developed with input from other defence contractors including Raytheon, Lockheed Martin, and General Atomics Electromagnetic Systems.

Dynetics is the prime contractor for the C-HGB, giving the company control over most aspects from development from choosing suppliers to manufacturing and testing.

Cook added: “We have selected a strong team with varying skillsets to help the US counter the threat from Russian and Chinese advances in hypersonic weapons. Each of these companies will bring decades of experience and will join science and technological capabilities to make a modern prototype and eventually become a programme of record.”

General Atomics Electromagnetic Systems president, Scott Forney, said: “We look forward to applying our extensive experience in manufacturing complex systems and leveraging our longstanding relationship with the national laboratories to expedite the delivery of this strategically important capability.”

The company is set to provide electrical equipment alongside wider production support.

“We are proud to partner on this incredible team working toward transforming research and technology into the next-generation weapon system for the warfighter.” 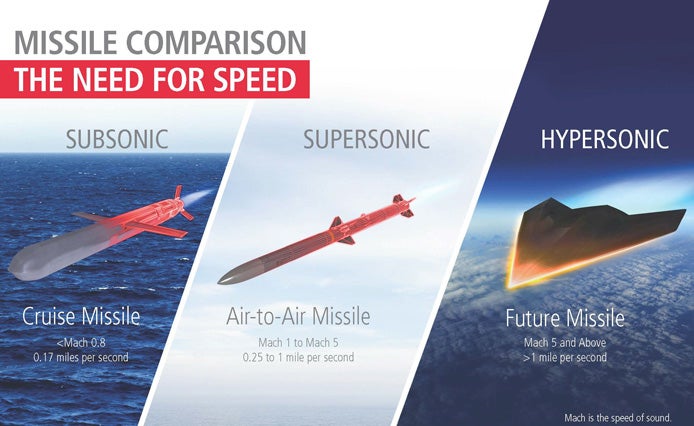 Raytheon is to build and deliver the control and power systems that will control the flight of the weapon systems.

Raytheon Advanced Missile Systems vice president Dr Thomas Bussing said: “Raytheon is working closely with Dynetics and its industry partners to quickly field the hypersonic weapon and provide our nation’s military with the tools it needs to stay ahead of the escalating threat.

“The development of hypersonic weapons is a priority for our country, and we are aggressively working to produce offensive and defensive solutions.”

Dynetics and Lockheed Martin are currently working on a separate US hypersonic weapons programme. The two companies are working to develop Long-Range Hypersonic Weapon (LHRW) systems. In total, Dyneticshas been awarded $407.6m for the development of both hypersonic systems.