Labour says in its manifesto that a Labour government would undertake a new “Strategic Defence and Security Review to assess the security challenges facing Britain, including new forms of hybrid, cyber and remote warfare”. This review would also factor in the climate emergency and possible future threats posed by resource competitions and involuntary migration.

The party says it is committed to maintaining defence spending of at least 2% of GDP, as is the NATO recommended level, which it would accompany with increased spending on UN Peacekeeping operations around the world.

Labour says it supports the renewal of the Trident, maintaining the UK’s continuous at-sea submarine-based nuclear deterrent but also says it “will also actively lead multilateral efforts under our obligations to the Non-Proliferation Treaty to create a nuclear-free world.”

Labour has also said it would publish a white paper on defence industrial strategy, including a national shipbuilding strategy. These plans will commit the Royal Navy and Royal Fleet Axillary to building all ships inside the UK.

On veterans, the party says it is committed to improving opportunities for veterans through ‘lifelong learning and training, housing and mental and physical health services’.

The party also plans to pay surviving nuclear-test veterans £50,000 each as well as finding a way to compensate black and Asian former soldiers “for the discriminatory demob payments they received compared to their white counterparts”.

The Conservatives say they will exceed the minimum 2% of GDP defence spending target and increase defence spending by 0.5% above inflation for every year of the new parliament. This includes a pledge to modernise and invest in training and equipping the armed forces.

The manifesto says: “We will maintain our Trident nuclear deterrent, which guarantees our security.” The party also pledges to adapt to new threats by investing in cybersecurity and creating a UK Space Command.

The manifesto adds: “We will support the UK’s world-class defence industry by investing in ambitious global programmes, including building the new Type 31 frigates in British shipyards such as Rosyth and a new generation of armoured vehicles, made in Britain.”

To support military veterans, the Conservatives say they will introduce legislation to “tackle the vexatious legal claims that undermine our armed forces” and further commit the Armed Forces Covenant to law. 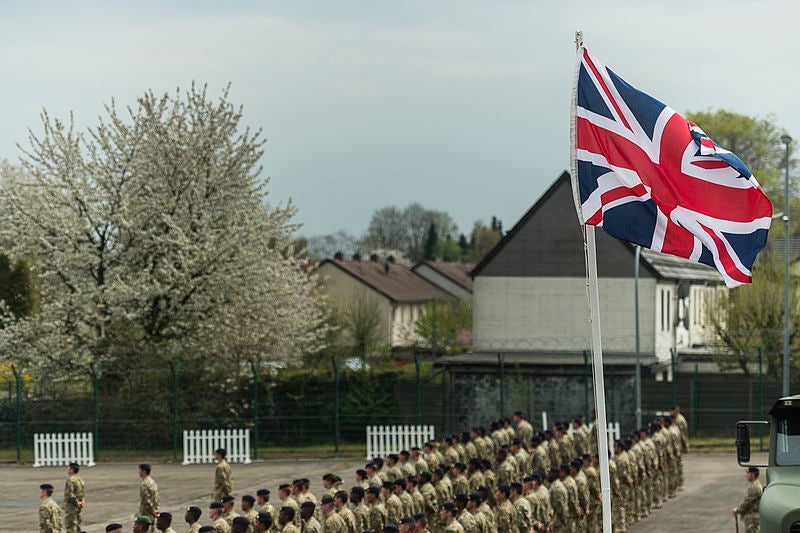 There is also joint by a pledge to continue to “acknowledge and commemorate” the role played by diaspora communities in past and current conflicts. The Conservatives also pledge to reduce National Insurance contributions for employers who employ ex-service members.

The Liberal Democrats’ manifesto commits it to spending 2% of GDP on defence, which it says it will bolster with an extra £3bn throughout parliament for the armed forces, which it says will be funded by remaining in the EU.

The Lib Dems plan to maintain the nuclear deterrent; however, the party wants to reduce the number of Trident-carrying Dreadnought submarines from four to three. The party plans to move “to a medium-readiness responsive posture and maintaining the deterrent through measures such as unpredictable and irregular patrolling patterns.”

The manifesto says the Lib Dems want to promote and institute an international treaty governing the use of technology in a warfare setting. It adds that the UK needs to “recognise the expansion of warfare into the cybersphere by investing in our security and intelligence services and acting to counter cyberattacks.”

The Lib Dems are also proposing what they call ‘golden handshakes’ worth £10,000 for STEM graduates to become armed forces engineers.

Finally, the Lib Dems say they plan to improve the state of housing given to service personnel by making the Ministry of Defence (MOD) follow the same rules as private landlords.

The Plaid Cymru manifesto says: “Plaid Cymru wants to see Wales as part of a global community where we work together to keep each other safe and secure.”

The party wants to scrap Trident, describing it as an “ineffective and unnecessary nuclear weapons system.” The party adds it is committed to blocking the renewal of the nuclear deterrent and would resist all attempts to deploy the UK’s nuclear arsenal in Wales.

It adds that any conflict should be subject to the support of all four nations in the United Kingdom adding that it would demand a vote in the Senedd (Welsh Parliament) before any UK-supported military intervention overseas.

It says they want to work with the UK Government on cyber-defences to protect Wales and the rest of the United Kingdom from online threats.

Plaid Cymru says that “successive governments” have forgotten veterans and will take responsibility for veterans based in Wales. The party says they will make sure former armed forces personnel have access to “excellent healthcare, including mental health care and adequate housing.”

The Brexit Party says it will ensure the UK’s continued relationship with NATO and keep defence spending in line with the recommended 2% of GDP as “an absolute minimum.”

The party says they will also withdraw the UK from the European Defence Union, along with EU defence procurement directives, as a means to ensure defence contracts stay in the UK.

The Green Party’s manifesto commits it to replacing the Ministry of Defence with a “Ministry for Security and Peace” which will have a core mission of peace enforcement.

The focus of the new ministry would be defending environments from the effects of “climate chaos” and working to help support areas suffering from humanitarian crises as a result of “climate-related disasters.”

The Green Party also says it will close the government’s arms-selling activities, including the Defence and Security Organisation (DSO). They also plan to end any subsidies given to UK companies “exporting of weapons and systems that fuel conflicts, violence and suffering across the world.”

The Greens will also cancel Trident and join the United Nation’s Treaty on the Prohibition of Nuclear Weapons. They say they would work within this to push for the destruction of all nuclear weapons, adding: “We need a security system that can keep us safe from 21st-century challenges, not one that could realise cold war nightmares.”

One of the party’s key manifesto pledges is to build a cross-party coalition to scrap Trident “as quickly and as safely as possible.” The SNP says that “the billions spent on Trident should be invested in our public services” instead.

The party added: “We want to see a world free from nuclear weapons, and with independence, Scotland can be an advocate for disarmament on the global stage.”

The manifesto also says that the Conservatives have broken promises to Scotland on defence by failing to increase defence personnel and by closing a fifth MOD site in Scotland.

The party is calling for a new SDSR to assess the emerging threats from hybrid warfare and adds that it would want it to “assess the need for permanent basing of ocean-going conventional patrol vessels in Scotland.”

The manifesto adds: “SNP MPs will campaign to retain existing Scottish bases and regiments. We will support our veterans and we will press for investment in conventional defence.” This is joined by a pledge to push for all Royal Navy and Royal Fleet Auxiliary ships to be built in the UK.

On veterans, the party pledges to offer commonwealth personnel and their families “indefinite right to remain” in the UK, and to push the MOD to house homeless former personnel in empty MOD housing.

Finally, the manifesto says SNP will push the UK government to end arms sales to regimes guilty of human rights violations and push for lethal autonomous weapons to be banned under international law.