What does the future hold for tanks?
Menu

The Battle of the Somme has gone down in history as one of the bloodiest ever fought, with over a million men killed or wounded in the course of the largest action on WW1’s Western Front. Less well known, however, is that the third phase of that 141-day long offensive also marked the battlefield debut of the tank.

Although its direct military impact on 15 September1916 was almost negligible, within a few short years the tank had risen from a ponderous, breakdown-prone novelty to a potent platform that was to dominate battlefields throughout the rest of the 20th Century and beyond. To this day, nothing makes such a bold statement of military might as the sight of massed armour, but the face of war has changed over the past 100 years, and radically so over the last 20. So how are tanks keeping up?

Defence contractors and military research establishments, from the Defense Advanced Research Projects Agency (DARPA) in the US to Britain’s own Defence Science and Technology Laboratory (Dstl), are busily working to find the answers.

From the outset, one thing seems very clear; all the experts are sure that tanks will still be around for their bi-centenary in 2116.

“Looking out beyond Challenger 2 all the ‘future’ studies indicate that there will be an enduring need for mobile and survivable fighting vehicles,” says William Suttie from the UK’s Dstl. “Whatever we do, the chances are other nations will continue to field heavy main battle tanks, hence we will continue to need something that can do what current MBTs can do, even if it looks different from current vehicles.”

“Whatever we do, the chances are other nations will continue to field heavy main battle tanks.”

John Puddy, technology lead at BAE Systems Land UK, agrees. It is, he asserts, all about relevancy and that is driven by the complexity of the modern battlespace, and the very broad range of threats today, compared with the more structured battlefields of the two World Wars.

“I definitely see tanks and armoured vehicles having a role for the next 100 years, as important [as], and possibly more important than, they have had in the last 100 years,” Puddy says. “Tanks are like heavy-weight boxers, able to throw big punches, and take big punches in their own right and that’s still going to be relevant, but there is a whole host of other roles for armoured vehicles.”

The nature of that armour could be very different in future. Modern tanks and AFVs enjoy unprecedented levels of protection, but as armour evolves, so too do armour piercing weapons. Although adding more weight of armour brings incremental improvements, it hampers speed and mobility, as well as driving up both development and deployment costs. As DARPA’s Ground X-Vehicle Technology programme manager Major Christopher Orlowski recently said, it is now about defying “the ‘more armour equals better protection’ axiom that has constrained armoured ground vehicle design for the past 100 years”.

Unsurprisingly, Dstl has plenty of its own ideas about this too. Active protection systems that can destroy or mitigate incoming fire, or novel materials that marry high protection with low weight, could remove the need for heavy armour, and so boost vehicle speed and agility. Stealth technologies and novel drive systems that reduce engine heat signatures could also enhance survivability without the need to bolt on more metal, by making tomorrow’s tanks and AFVs harder to detect and more difficult targets to hit. 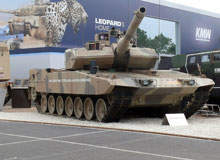 Rise of the robots?

Of course, the obvious way to improve survivability is not to put anyone in danger in the first place, and a number of possible visions of the future battlefield feature unmanned armoured ground vehicles playing their part. In many respects, this represents the logical extension of the growing move towards greater automation which has made familiar items of drones and already brought unmanned turrets and remote control to armoured vehicles.

This trend is likely to continue, possibly even evolving to enable future armies to deploy a ground swarm of drone vehicles in support of conventional MBTs and AFVs, but that is perhaps as far as it is likely to go.

“I don’t think we’re going to see a future like ‘Terminator’ with humans completely devoid from the decision point,” Puddy says. “Instead robotics will help human operators to have a better understanding of the battlefield whilst keeping them out of immediate harm’s way.”

Suttie echoes this view. He feels that robotic systems are likely to be an important part of the mix of future ground-based warfighting capabilities and key contributors to reducing the risks to troops and also, by improving sensing and targeting, cutting the danger of collateral damage. “There will, however, be an enduring need for ‘boots on the ground’ to interact with the local population,” Suttie says, “and policy is that all engagement decisions will have a ‘human in the loop’ – hence no autonomous weapons.”

So, if killer robots are not yet around the corner, what about that other mainstay of dystopian sci-fi – ray guns?

“There have already been successful demonstrators,” Puddy says, “and lasers and energy weapons are an area that both the Dstl and industry and are investing in at the moment.” He suggests that part of the appeal could come from their potential against the escalating threat posed by UAVs, and that ultimately while they are unlikely to replace a tank’s main armament any time soon, lasers could well become an important part of the whole defensive measures system.

“Lasers and energy weapons are an area that both the Dstl and industry and are investing in at the moment.”

One thing is clear; with its potential array of active electric armour, massively enhanced situational awareness sensors, high-speed electro-hybrid drive train and mounted laser emitters, tomorrow’s tank is going to call for a lot of on-board power. Developments in light, high-capacity batteries will play as much a part in the bi-centennial MBT as any advance in light, effective armour – but will it still look like a tank?

The shape of things to come

The familiar tracked, weapon-turreted, rear-engined silhouette has remained essentially the same since Renault produced its FT17 towards the end of WW1, but some of the new designs that have been put forward look more like Mars rovers than earth-bound weapon platforms. It seems when it comes to the future, nothing is sacrosanct; the tank of 2116 could well be wheeled rather than tracked, and those wheels might even be on the end of long, flexible ant-like legs, like one concept showcased by BAE Systems at September’s DVD2016.

Predicting what armoured vehicles will look like is as difficult as forecasting the threats that they will face, but it does appear that the long-standing axiom is finally going to be laid to rest; the days of simply adding more armour are over.

“The technology is becoming available to take a very different approach to MBT design using advanced materials, novel automotive systems, new weapon systems and active protection systems, resulting in much lighter, more agile platforms,” Suttie says. “There will always be the issue of affordability and robustness that comes with increased complexity, as these advanced solutions must be able to operate reliably in all environments and be resilient to all types of threat.”

Tomorrow’s tank may be a very different beast indeed.