The Patria AMV (Armoured Modular Vehicle) is a modern 8×8 armoured wheeled vehicle manufactured by Finland-based Patria. Following the market launch in 2004, more than 1,600 Patria AMVs have so far been ordered by the armed forces of Finland, Croatia, Poland, Slovenia, South Africa, Sweden and the UAE.

The Patria AMV carries three crew and up to ten troops, protecting the crew from improvised explosive devices (IEDs) and explosively formed penetrators (EFP). Its forward hull offers ballistic protection against Armour Piercing Fin Stabilised Discarding Sabot-Tracer (APFSDS-T) of up to 30mm. The vehicle can also withstand explosive mines of up to 10kg.

The Boxer APC version is one of the world’s best armoured personnel carriers produced by ARTEC, a joint venture between Krauss-Maffei Wegmann (KMW) and Rheinmetall. Primarily operated by German Army, the Boxer APC can safely transport 11 occupants, including three crew and eight infantrymen.

The vehicle is integrated with spaced and sloped armour solutions for protection against mines, IEDs and ballistic threats. It protects the crew from anti-tank and anti-personnel mines, bomblets and artillery shells, as well as offers all-round ballistic protection against arms up to 14.5mm at a 30° elevation.

FLW 200 remote-controlled light weapon station aboard the vehicle is installed with a 12.7mm heavy machine gun or a 40mm automatic grenade launcher. The vehicle also supports IdZ (Infantryman of the future) technology developed by the German Army. The Boxer armoured personnel carrier has a top speed of 103km/h and a class-leading range of 1,050km.

The Piranha V armoured personnel carrier accommodates 13 personnel in a well-protected armoured hull, which resists the impact of mines, IEDs and EFP threats. The vehicle can be fitted with an active protection system and add-on armour, offering various levels of protection with more than 95% coverage.

The carrier can be armed with modular weapon platforms ranging from remotely controlled light weapon stations to heavy turret/gun systems such as the LANCE 30mm Modular Turret System. It integrates an MTU diesel engine and Fuel Efficient Drive train System (FEDS), which provide a maximum speed of 100km/h and range of 550km.

The Boomerang K-16 is a new 8×8 APC developed by Military Industrial Company (VPK) to replace the ageing BTR family of armoured vehicles in service with the Russian Armed Forces. It was unveiled for the first time to the public during the rehearsals of the 2015 Moscow Victory Day Parade. 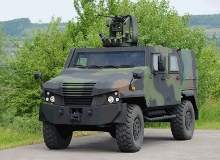 Manned by a crew of three, including a commander, a gunner and a driver, the APC can carry seven infantrymen. The Boomerang K-16 integrates bolt-on ceramic armour, which offers all-around protection against 14.5mm armour-piercing (AP) rounds and artillery fragments from 152mm rounds.

The vehicle is installed with a remotely operated turret mounting a sensor array and a 12.7mm machine gun. Powered by a 510hp UTD-32TR four-stroke turbocharged diesel engine, the APC can attain a top speed of 100km/h and a maximum range of 800km.

The Pandur II APC offers seating for 14 troops, including crew, and can be integrated with modular, scalable armoured solutions for protection against ballistic threats, mines, IEDs, and rocket-propelled grenades (RPGs).

The SP30 turret atop the Pandur II is armed with a Mauser 30mm MK 30-2 cannon while vehicles used by the Czech Army are equipped with RAFAEL RCWS-30 mounting an ATK MK44 30mm cannon. Secondary armament includes a 7.62mm machine gun and 76mm smoke grenade launchers. The vehicle has a maximum speed of 105km/h and a range of 700km.

The ARMA 8×8 modular wheeled armoured vehicle was unveiled by Turkey-based Otokar Otomotiv ve Savunma Sanayi at the 2013 International Defence Industry Fair (IDF). The base ARMA vehicle serves as a modular platform for a variety of mission configurations.

The APC version of ARMA is fitted with a remote weapons station with a 7.62mm/12.7mm machine gun or an open cupola with a 20mm cannon or a Mizrak-30 medium-calibre remotely controlled turret mounting a 30mm gun. The 8.9l, six-cylinder diesel engine ensures a top speed of 105km/h and the vehicle can achieve a range of 700km.

The AV8 armoured personnel carrier (APC) is manufactured by Deftech in collaboration with FNSS and was introduced in 2012. The vehicle was developed for the Malaysian Armed Forces, based on FNSS’ Pars 8×8 APC vehicles, which are in service with the Turkish Army.

The vehicle has the capacity to carry 13 troops and is fitted with a composite aluminium and steel armour. It also has additional armour hinged to the front area, as well as either side of the hull.

The AV8 vehicle is equipped with two-man Denel LTC30 turret with a 30mm GI-30 cannon and an FN Herstal MAG 58M coaxial 7.62mm machine gun. It is powered by a Deutz turbocharged diesel engine and can attain a maximum speed of 100km/h and cruise range of 700km.

The Terrex 8×8 armoured personnel carrier (APC) is manufactured by ST Kinetics and in service with the Singapore Armed Forces. The vehicle, offering greater mobility and enhanced survivability, carries 13 troops. It has a built-in central tyre inflation system that permits automated inflation and deflation of tyres for different terrains during movement.

The APC is equipped with active and passive armour suites and can be protected against IEDs and mines. It contains a twin-weapon remote control weapons system, including a 40mm automatic grenade launcher and a 7.62mm general purpose machine gun, or a 0.5in HMG.

The vehicle runs on a six-cylinder, four-stroke Caterpillar C9 turbo diesel engine, which generates 450hp of power, enabling the vehicle to attain a maximum speed of 105km/h and range of 600km.

The BTR-4MV1 is an up-armoured version of the BTR-4 8×8 armoured personnel carrier (APC) manufactured by Kharkiv Morozov Machine Building Design Bureau based in Ukraine. The BT-4 family of vehicles is in service with the armies of Iraq and Ukraine transporting troops of mechanised infantry units and providing fire support in combat actions.

The BTR-4MV1 APC was unveiled for the first time during the Arms and Security 2017 exhibition held in October 2017. It can carry three crew and seven passengers. The vehicle integrates an advanced modular armour protection system that offers up to Nato STANAG Level 5 protection. It can be operated in all climatic conditions during day and night.

The APC is fitted with a 30mm automatic gun and a 7.62mm machine gun, and also has a 30mm grenade launcher and anti-tank missile system. It runs on a 3TD diesel engine that generates 500hp and enables a maximum speed of 110km/h, as well as a cruise range of 690km.

The BTR-82A, an improved version of BTR-80 family of vehicles, is an 8×8 armoured personnel carrier (APC) produced by Military Industrial Company of Russia for use by the armies of Russia and Kazakhstan.

The vehicle can carry three crew and seven passengers, as well as offers more advanced protection compared to the BTR-80. Spall liners inside the BTR-82A armour protect the crew against mines and IEDs.

Since the Cold War main battle tanks (MBTs) have evolved from being simple and light to heavy, modernised and highly mobile, with advancements in weaponry and countermeasures.