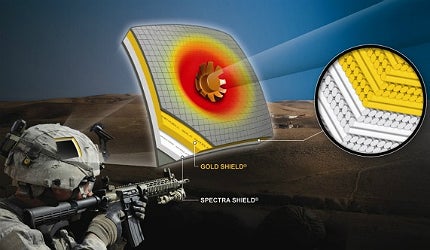 At first glance, the standard army-issue helmet has changed little from the steel pots worn by soldiers on the battlefields of World War II. A rigid outer shell protects from ballistic penetration and impact, while internal padding and suspension prevents shock waves travelling through to the head.

However, designs are constantly evolving with cutting-edge innovations aiming to improve the protection which helmets offer. One key breakthrough is new materials that offer more ballistic, impact and deformation protection at much lower weights.

"Designs are constantly evolving with cutting-edge innovations aiming to improve the protection which helmets offer."

One of the company’s most sophisticated products is Spectra Shield, made from ultra-high molecular weight polyethylene fibres called Spectra, laid at right-angles rather than woven and held together with a thermoplastic matrix. Another, called Gold Shield, incorporates DuPont Kevlar fibres.

James Thagard, Global marketing manager, says Kevlar fibre was developed in the 1970s and was used for the first composite helmet known as personnel armoured system for ground troops (PASGT) in 1980. It slightly reduced the weight, compared a steel helmet, but more significantly increased the ballistic performance by 25%.

"With the war in Afghanistan beginning in 2001, the US Army sought out to develop a more advanced helmet over the PASGT and used an improved Kevlar fibre to reduce the weight of the PASGT while increasing the ballistic performance, which in 2003 led to the fielding of the advanced combat helmet (ACH)," says Thagard.

Honeywell became involved in 2007 when the US Army carried out materials evaluation across a broad range of fibres, including Kevlar, Teijen Twaron, DSM Dyneema and Honeywell Spectra Fibre, which confirmed that ultra-high molecular weight polyethylene fibres, such as Spectra Shield, provided the highest level of ballistic performance.

Manufacturers had to develop new processing technologies to best use these materials. The two main methods are thermosetting, where heat is applied to aramid fibres to cross-link the resin and make the helmet rigid, and thermoplastic for unidirectional materials, which are heated to make the resin flow around a mould and then cooled down in the final shape.

The new materials were first used in the lightweight tactical helmets which are primarily worn by US Special Forces, including the Crye Precision Airframe helmet. This led to the Enhanced Combat Helmet (Ech) programme, launched in 2007 to replace the combat helmets of the US Army, Navy and Marines, using thermoplastic polyethylene.

"The ECH is really a step-change in performance over the previous aramid helmet," says Thagard. "It’s not any lighter than the ACH, but offers a 35% increase in ballistic performance and improved impact protection."

"Future head protection gear for soldiers may look beyond ballistic and impact protection to address sources of traumatic brain injury other than direct impact."

Honeywell is now working on a programme with the US Army to define the next generation of the army ECH, with an initial order of 250,000 due for service personnel currently engaged in active combat, rather than an entire fleet replacement as occurred when the ACH replaced PASGT with more than a million units.

"The army realises that technology will change rapidly, so it makes sense to buy a smaller quantity rather than a million for all the troops because in a few years the technology will evolve," says Thagard.

Honeywell also plans to be involved in the US Army Soldier Protection System which will take place within a 2014 – 2015 timeframe, with the aim of delivering new reduced-weight body armour, soft armour and helmets to the US Army.

Thagard is keen to emphasise that Honeywell focuses on how its materials will best serve the individual wearing the helmet made from them.

"We try to develop better ballistic performance, but we also focus on other factors including impact performance [and] 9mm backface deformation performance," he says.

"A lot of our push is trying to help manufacturers develop solutions using our materials, but equally we support our customer, by which I mean programmes such as the US Army Soldier Protection System or similar efforts from the UK MoD.

"We want to help them understand art of the possible when they’re developing a helmet, show them what options we can offer in terms of weight, cost and performance, and help industry define future requirements."

Future head protection gear for soldiers may look beyond ballistic and impact protection to address sources of traumatic brain injury other than direct impact. An international team led by Boston University researchers recently published the results of their research, which showed violent head movements in a blast wave may cause brain damage, resulting in severe psychological problems.

The US Land Warrior is an integrated fighting system for individual infantry soldiers which gives the soldier enhanced tactical awareness, lethality and survivability.

The research was inspired by veterans returning from Iraq and Afghanistan who experienced violent mood swings and sunk into depression, experienced bad memory loss and in some cases were so depressed they committed suicide. They were often found to have suffered a blast injury typically from an improvised explosive device (IED).

One of the researchers recognised that the symptoms were identical to what he had seen in American football players who suffer brain injury from impact, usually from helmets clashing, and also in boxers. The families of soldiers who had committed suicide donated their brains to research, and they were found to exhibit the same tissue damage as the athletes.

Robin Cleveland, professor of engineering science at MAGDALENE COLLEGE, Oxford University, was brought in to contribute his expertise in shockwave physics to the multidisciplinary team.

"The thought then was that the pressure from the shockwave going into the brain was what was damaging the tissue," says Cleveland. "What’s known from both boxing and American football is that it’s actually the oscillation of the head around the neck that does the damage. It’s like a grown-up version of shaken baby syndrome."

The team exposed mice to blast waves similar to those soldiers would experience in an explosion and found they were less able to perform memory tasks, such as finding food in a maze. However, if the mouse was placed in a harness that prevented the head moving, the blast wave did not result in memory loss.

"Honeywell is now working on a programme with the US Army to define the next generation of the army ECH, with an initial order of 250,000."

"We give soldiers a helmet to stop blast shockwaves getting into the brain, but a better strategy may be to stop the head wobbling around when it gets hit by the blast wave," says Cleveland.

Cleveland concedes that this may be easy to achieve in vehicles where the head can be constrained, but soldiers on foot patrol need to look around. This may result in a solution such as a seatbelt which only tightens during violent motion or something similar to airbags in a car that activate on impact.

The team hopes to further the research by discovering how the acceleration of the head in a blast wave contributes to brain damage and work out how much is tolerable to define parameters for an engineering solution. After that they hope to work with protective gear manufacturers and other researchers, who work with materials with special properties, to design solutions that could help prevent traumatic brain injuries which have such lasting and devastating effects on the lives of soldiers and their families.