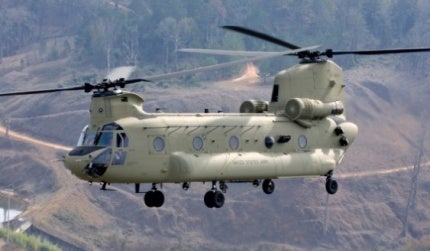 Boeing has been awarded a $4bn contract for delivery of 177 CH-47F Chinook medium-to-heavy-lift helicopters to the US Army.

Representing a cost-effective alternative to the annual contracts, the multi-year contract also features options which, if exercised by the army, could increase the total number of aircraft to 215.

Expected to help the US Government save more than $800m, the contract also eventually brings the army’s CH-47F total procurement close to its intended target of 464 aircraft, including 24 units for replacement of peacetime attrition aircraft.

US Army to cut 12 brigade combat teams by 2017, says general

The US Army will cut 12 brigade combat teams (BCTs) by the end of 2017 as part of its force restructuring due to the Budget Control Act of 2011, bringing the number of active-duty BCTs to 33, army chief of staff general Raymond Odierno has revealed.

Speaking at a Pentagon news conference in Washington DC, Odierno said the service would also reduce its active component from a wartime high of 570,000 soldiers to 490,000 by 2017, which represents one of its largest organisational changes since the Second World War.

Selected following comprehensive review involving environmental and socio-economic impacts of the reductions, ability to train soldiers, expand and regenerate forces, as well as geographic distribution, the majority of BCTs being dissolved are based in the US, while two are operating in Germany.

BearCat MedEvac LE is specifically designed to address the combined requirements of special weapons and tactics (SWAT) and tactical EMS teams, while BearCat MedEvac MIL is for tactical combat casual care (TC3) within the defence sector.

Meggitt Training Systems has been awarded a series of contracts for delivery of additional FATS virtual small arms training simulator (SAT) systems to the Italian Ministry of Defence (MoD).

Valued at a combined $17m, the contract involves the addition of around 55 SATs and 660 weapon training simulation systems (WTSS) to the Italian Army’s existing inventory of Meggitt training equipment.

The package will also include the company’s new FATS M100 system architecture, which will support the army’s expanding capabilities due to compatibility with a broad spectrum of devices and software packages.

Kongsberg Group has been awarded a contract by Ðuro Ðakovic to supply its M151 12.7mm calibre Protector remote weapon stations (RWS) to the Croatian Army.

Valued at $17.03m, the order forms part of a contract signed between Ðuro Ðakovic and the Croatia defence ministry for the acquisition and installation of Protector systems on the national army’s AMV 8×8 armoured combat vehicles.

After signing the contract, Croatian defence minister Ante Kotromanovic said the continued cooperation with Ðuro Ðakovic on combat armoured vehicle project represents another step in the ministry’s efforts to build a small but modern and mobile army.

The UK Army has received the first Terrier light-armoured vehicle under contract from BAE Systems for use by the Royal Engineers.

Around 60 vehicles were ordered by the UK Ministry of Defence (MoD) along with logistics support and training package under a £350m deal to replace the Royal Engineers’ existing FV180 combat engineer tractor fleet in July 2002.

US to arm Syrian rebels after ‘proven’ chemical attacks

The US is to provide military support to Syrian rebel forces after announcing it has evidence that suggests chemical weapon attacks have been carried out by government forces in the country.

The US Central Intelligence Agency (CIA) stated that it has evidence that such attacks have happened after tests on blood, urine and hair samples collected from rebel fighters.

The announcement marks the first time that the US has supported such claims, following similar ones made by British and French intelligence services.

The Police Modernization and Counter Terrorism Market in India to 2024: Market Brief