End of an icon: the rise and fall of the Humvee
Menu

If you ask someone outside the military if they’ve ever heard of the High Mobility Multipurpose Wheeled Vehicle (HMMWV), the chances are you’ll be greeted with a vacant stare as they wonder what you’re talking about. Ask again, but use the HMMWV’s more well-known nickname – the Humvee – and the answer will be an emphatic, “of course!”

The Humvee will turn 30 next year and, like the Jeep utility vehicle it replaced in the 1980s, has achieved iconic status both in the military and beyond. It first came to national prominence during the First Gulf War, with rolling 24-hour news coverage almost always including the Humvee to illustrate US military power and technological superiority.

“I think the HMMWV’s iconic status resulted from its ability to reliably and consistently meet soldiers’ changing needs, doing so with greater capabilities than its predecessor,” explains Scott Davis, program executive officer at the US Army’s Combat Support and Combat Services Support, the office responsible for the Humvee. “There were certainly skeptics when we replaced the Jeep with the HMMWV, but today you find HMMWVs on every post and in numerous partner militaries around the world.”

“It has been, and will continue to be, a great light tactical vehicle for a specific mission set,” Davis adds.

The US Army’s armoured vehicle conundrum

Plans were for the GCV to replace an ageing fleet of Bradley vehicles. Instead, it joins a growing list of failed army acquisition programmes.

Unlike many other vehicles on the battlefield, the Humvee’s narrow headlights, protruding grill and muscular – almost steroidal – proportions make the vehicle instantly recognisable to just about everyone.

The Humvee made such an impression that, after the Gulf War, manufacturer AM General announced a civilian version to meet popular demand. One enthusiastic fan told the New York Times: “When I saw these things on TV during the Gulf War, and being a vet myself, they made an impression on me. They’re like the American spirit”. Hollywood muscleman Arnold Schwarzenegger bought the first Hummer H1 in 1992 and several more throughout the 1990s.

The Humvee’s story began in the late 1970s, with the US Army realising it needed better performing vehicles to replace its ageing fleet of M561 Gama Goats and M151 Jeeps. In particular, the army wanted one ‘jack-of-all-trades’ light tactical vehicle which could perform the role of several existing trucks already in service. In 1979, the army drafted final specifications for the new vehicle which would include a common chassis that could be modified into a number of variants.

AM General, Chrysler Defense and Teledyne Continental were chosen to design and build eleven prototype HMMWVs for testing. The test vehicles eventually covered more than 600,000 miles and conducted trials which included tough off-road courses in desert and Arctic conditions. In the end it was AM General’s design – the Humvee we know today – that won and the company was awarded an initial contract for 2,334 vehicles in 1983. 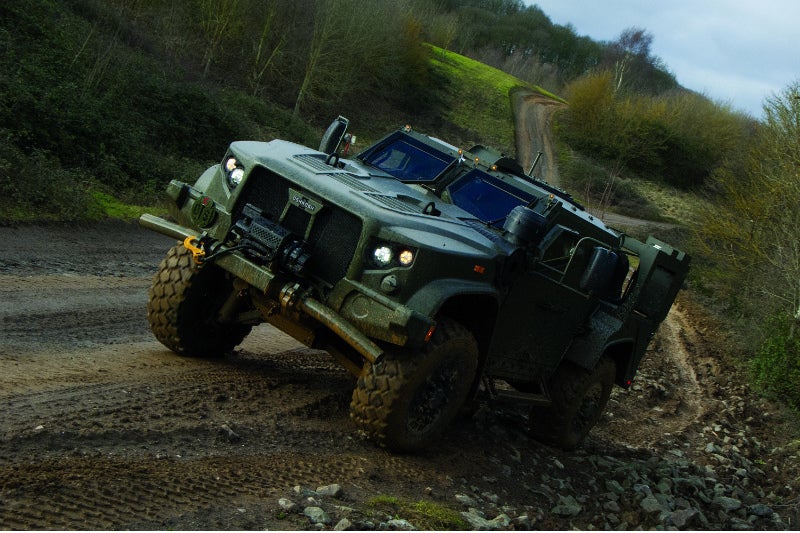 Taking the Oshkosh JLTV for a ride at DVD2018

This was the first batch of a five-year contract for nearly 55,000 vehicles, of which 39,000 were for the army and the rest were for the other services including the Marine Corps. By the time of the First Gulf War, AM General had produced over 72,000 vehicles for the US and international customers. And by its tenth anniversary in 1995, a massive 100,000 units had been delivered.

“It has been, and will continue to be, a great light tactical vehicle for a specific mission set.”

After 9/11, US troops deployed to Afghanistan with Humvees to fight the Taliban and root out top members of Al Qaeda. With Afghanistan lacking even basic roads, the Humvee was perfect for going over the rough mountainous terrain, especially around the Tora Bora cave complex.

“Most soldiers who had experience of the Humvee in the ‘pre-IED era’ liked it,” says Paul Scharre, a former infantryman who deployed to Afghanistan in 2002 with the 75th Ranger Regiment. “It’s a very rugged off-road vehicle, with a wide wheel base so it is very hard to flip.”

During early operations in Afghanistan, when the IED threat was almost non-existent, soldiers like Scharre would make the Humvees as light as possible by removing unnecessary armour and even doors. This made the vehicle much more manoeuvrable and gave soldiers greater visibility.

Humvee in Iraq, the beginning of the end

The Humvee was also called into action during the 2003 Iraq War, nearly 20 years after it was introduced. But the positive headlines it received in the First Gulf War were replaced with growing discontent over the workhorse’s ability to keep troops safe against new threats such as IEDs, mines and car bombs. From its inception, the Humvee was not designed as a combat vehicle and lacked any significant armour.

The US military responded to the IED threat by ordering armoured Humvees as well as thousands of armour kits which would modify existing vehicles. But the insurgency was still finding ways to penetrate the armour. In the first four months of 2006 – when the Iraqi insurgency was reaching its peak – 67 US troops travelling in Humvee vehicles were killed in bomb attacks. Bolting on the extra armour was also making the vehicles an “ungainly beast” according to Scharre, who also deployed to Iraq.

“The armour had all sorts of problems. You had armoured doors that weighed hundreds of pounds and they were hard to open…it was like doing a one arm sideways bench press,” Scharre remembers. “The additional armour to the turret – because the turret was originally unarmoured – would make the vehicles really top heavy which decreased the roll angle considerably…it was much easier to flip.”

Engineers are taking advantage of Formula 1 design tools, including Oculus Rift-style virtual reality, to test and review equipment before it’s even built.

This was the beginning of the end for the Humvee. By 2007, the US Marine Corps had decided to replace all of its Humvees in Iraq and Afghanistan with mine-resistance ambush protected vehicles (MRAP). Also in 2007, then-Defense Secretary Robert Gates had signalled his intention to buy $1bn worth of MRAPs as part of urgent operational requirements.

Since then, the Pentagon has reportedly spent around $50bn on fielding 24,000 MRAPs to US and coalition forces in Iraq and Afghanistan. However, some experts are critical of the MRAP’s massive size, which is necessary when it comes to protecting troops against IEDs but compromises mobility.

Replacing the Humvee, the JLTV and the future

The US military is in the final stages of its HMMWV successor programme, known as the Joint Light Tactical Vehicle (JLTV). With the new JLTV, the US Army and US Marine Corps are hoping to merge the Humvee’s off-road performance and the MRAP’s unrivalled protection against IEDs.

“The HMMWV was the right capability for its era,” Scott Davis explains, “providing a useful payload and mobility in more protected areas. It was never intended to be a combat vehicle. Adding the protection soldiers needed in today’s full-spectrum threat environments to a HMMWV substantially degraded its mobility, and in some cases eliminated its payload capacity.”

“From its inception, the Humvee was not designed as a combat vehicle and lacked any significant armour.”

He adds: “Recent conflicts blurred ‘front lines” and ‘rear areas’ and illustrated the need for a substantially improved protected mobility solution that doesn’t have to sacrifice payload, performance, or maneuverability.”
Three companies are currently battling it out for the JLTV contract: Lockheed Martin, Oshkosh Defense and the original Humvee manufacturer, AM General. A winner of the lucrative $31bn programme will be announced in 2015, with around 50,000 vehicles expected to be bought. But the US Army is quick to stress that the JLTV will not be a like-for-like replacement.

“It’s important to remember that JLTV is not a one-for-one replacement of the HMMWV… the HMMWV will remain with us for many years to come, filling several missions outside of a full-spectrum threat environment, and I’m confident it will provide useful service in those roles,” says Davis.

A swarm of autonomous Humvees

With several programmes advancing unmanned ground vehicle technology, the Humvee could also experience a 21st century re-birth as a low-cost unmanned platform. Using technology such as the Autonomous Mobility Applique System, converted Humvee vehicles could be used as highly mobile scout vehicles at the front of advancing troops. That’s an idea advanced by Paul Scharre, who is now a fellow at the Center for New American Security and project director for its 20YY Warfare Initiative.

In an unmanned configuration, operational requirements such as protection and armour become less of a concern. “Ultimately, you want to get to a place where you don’t have a person driving each Humvee remotely,” explains Scharre. “The vehicle has to be automated enough to drive itself, and you want a person to be able to control a group of them. So you can have one soldier control a swarm of vehicles.”

With thousands of Humvees still in the US inventory – a total of 281,000 were built by AM General – and cost pressures affecting several acquisition programmes including the JLTV, a fleet of autonomous Humvees could continue the vehicle’s legacy for many more years to come.