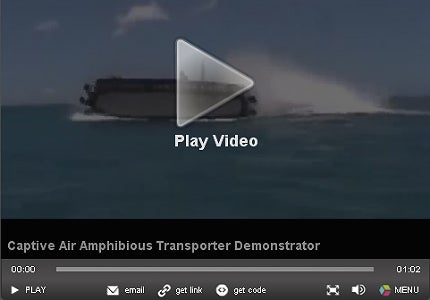 The Defense Advanced Research Projects Agency (DARPA) has released video footage of its groundbreaking new amphibious delivery vehicle designed to deliver supplies in bulk seamlessly over either water or land.

The 1/5 scale demonstrator of the Captive Air Amphibious Transporter (Caat) can carry standard ship containers across even debris-strewn surfaces and waterways using tank-line treads with elongated rectangular segments. In the right conditions it could also tow a raft carrying further cargo behind it in a single delivery.

The footage shows the four-ton vehicle making light work of speedily navigating a harbour, setting off from a sandy beach, steaming along at sea so fast it leaves a high wake, skimming over a swamp, climbing a steep jetty and navigating wreckage as if it were not there.

Following natural disasters such as earthquakes and tsunamis, dockside infrastructure is often destroyed, waterways become dangerously clogged with flotsam and the sea level can be dramatically affected, so normal shipping methods cannot be used. CAAT uses air-filled pontoons incorporated into the tread to keep it afloat and propel it over water and land, navigating even debris-strewn surfaces.

Using CAAT would enable a container ship, which can carry 100,000 tons of supplies, to anchor at a safe distance and transfer standard 20-foot containers to shore without the need to unpack them for transport.

Funding the CAAT – a TEMP programme

The CAAT technology demonstrator is jointly funded by the Office of Naval Research, which is interested in its potential as future amphibious transport for the Marines and navy.

Protection Ensemble Test Mannequin (PETMAN) is a humanoid robot being developed for the US Army.

In addition to CAAT, the other solutions that constitute TEMP are: core support modules to provide life-support requirements aboard a container ship; motion-stabilised cranes to transfer cargo containers from the deck of a ship onto the CAAT; and a parafoil unmanned air-delivery system to move supplies direct from the container ship to shore.

Whether or not the demonstrators translate directly into usable technology, DARPA hopes the data it gathers will help de-risk future efforts to support humanitarian relief missions.

The US Army’s Defense Advanced Research Projects Agency (DARPA) has long left onlookers intrigued with its work. After creating a forerunner for the internet and expanding knowledge of autonomous systems and advanced radar, the agency’s budget has spiralled.

The Global Submarine and MRO Market in Brazil to 2025: Market Brief

The Police Modernization and Counter Terrorism Market in Brazil to 2024: Market Brief

The Submarine Market in Brazil to 2024: Market Brief

The Global Submarine and MRO Market in Saudi Arabia to 2025: Market Brief

The Police Modernization Market in Brazil to 2025: Market Brief