BAE Systems chief executive Ian King and his EADS counterpart Tom Enders have since spoken of forming what would become a European powerhouse of aerospace and defence technology. With two of the continent’s largest defence companies planning to merge, the announcement has predictably triggered a range of responses, ranging from vehement opposition to enthusiastic support.

The companies’ desire to investigate a merger may have been shaped by the need for Europe to be capable of competing with growth markets such as Brazil in the future, but programmes currently underway could see an immediate influence.

"EADS brings to the table considerable expertise in the UAV field through its production of unmanned military aircraft."

Although some of the merger’s detractors have moved to question the synergies vaunted by Enders and King, there are programmes that could see collaboration between two companies under a singular entity. One of these could feasibly be the joint-UCAV contract signed earlier this year between BAE and Dassault, combining the two companies’ efforts with the Taranis and nEUROn programmes.

Although not included in the original agreement, EADS brings to the table considerable expertise in the UAV field through its production of unmanned military aircraft, including the Barracuda and Talarion vehicles, which are currently in development.

This merger comes just more than a year after EADS directors voiced their concern at the BAE / Dassault programme, dubbed Telemos, concerned that the group would be crowded out of the European military aircraft market. Citing unwelcome intra-European competition, then-Cassidian head of development Stefan Zoller said: "We are not pleased by the development that we have potentially two competing projects in Europe."

The merger of BAE and EADS could feasibly remove that competition, bringing in EADS expertise to produce a single vehicle to cater for not just the Anglo-French cooperative, but the European market in general.

Potential threats to jobs and industry 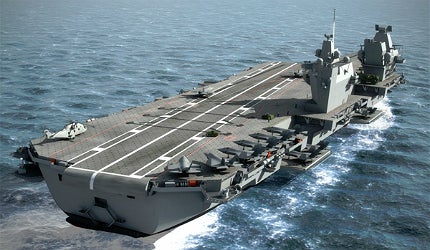 Germany has demanded that it maintains a footing in the new group equal to France, a demand that would require the nation purchasing car manufacturer Daimler’s stake through the state development bank KfW. This move would possibly disrupt the merger, with the UK Government reportedly willing to veto the deal should any nation hold a stake above nine percent.

"Concern has also been raised regarding the overall impact the deal is likely to have on the wider UK defence industry, particularly the industrial supply chain."

Germany could, however, be appeased by the guarantee of jobs staying within the nation. The prospect of job losses in the merger has proven to be a contentious issue, with unions in the UK voicing their opposition to the merger for that reason. "I am so convinced about our project that I am ready to talk about attractive job and site guarantees which I could not consider for EADS," said Enders.

As the new entity looks to streamline operations and reduce waste, however, job losses are almost inevitable. A brewing argument about the location of the company’s headquarters could have implications as to the location of job losses, but more importance is likely to be placed upon the locations of major projects, such as the construction of the UK Royal Navy’s Queen Elizabeth-Class aircraft carriers.

Concern has also been raised regarding the overall impact the deal is likely to have on the wider UK defence industry, particularly the industrial supply chain. Financial health monitors Company Watch has indicated that a merger could see European suppliers of EADS, which will hold a 60% stake in the merged entity, favoured over the 7,500 UK businesses that currently serve BAE.

Company Watch External Affairs head Nick Hood said: "The merger of BAE and EADS may have the unexpected side effect of threatening not just supply companies and their employees, but the UK’s climb out of the double dip recession. This is not time to play with the fate of 7,500 UK suppliers and their 52,000 employees."

While BAE and EADS attempt to construct a proposal that would appease those involved, politicians across Europe have continued to voice their opinions on the deal, with many signalling their alarm. Another such detractor is the US Department of Defense, which has seemingly voiced its alarm at the notion of other foreign governments being in a position to view secretive contracts signed with BAE. One such measure taken to appease the US DoD could be the ringfencing of this BAE business, keeping it aside from the merger.

"One such measure taken to appease the US DoD could be the ringfencing of this BAE business, keeping it aside from the merger."

Although governmental talks continue, the French Government is steadfastly refusing to agree on a ceiling regarding the stake in which any one government can have in the formed entity. Former UK defence secretary Liam Fox, while issuing his support of the deal, has continued to iterate his belief that "undue political interference from France and Germany" remains the most significant risk to any potential merger, asserting that a US partner for BAE was his instinctive preference.

Although UK Prime Minister David Cameron has been vocal in his support of such a deal, disagreements regarding state shareholdings have remained the largest obstacle to the proposed deal. Cameron’s French and German counterparts Francois Hollande and Angela Merkel pledged to consult closely, and remain on stand-by to meet with David Cameron should showdown talks to save the deal become a necessity.

With the 10 October deadline looming quickly, by which time both BAE and EADS must present their proposals, it is highly likely that a 14-day extension will be requested. Given the complicated nature of such a merger, the extent of opposition and the required political agreements, any green light is far from certain.

In September 2010, the US MRAP Joint Program Office (JPO) signed a $629m contract with BAE Systems to upgrade an additional 1,700 Caiman MRAP vehicles.

The Terrier is an air transportable light armoured vehicle designed and manufactured by BAE Systems for the British Army.

The Roland short-range air defence missile system is produced by EADS Euromissile, based in Fontenay-aux-Roses, France.