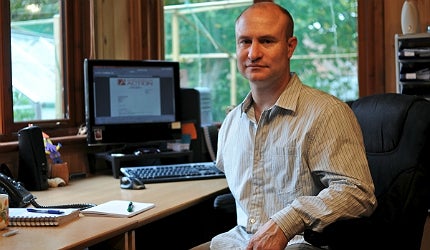 In June 2012, ‘Amputees in Action’, an agency for amputee actors, was appointed by international service company Serco Group as one of two training subcontractors to help deliver a major contract awarded by the UK Ministry of Defence.

Under the Contemporary Operating Environment Force (COEFOR) contract, Amputees in Action will provide their own unique brand of raw, blood and guts realism to help support The British Army in their preparations for operations, such as those in Afghanistan.

Here, Berenice Baker asks John Pickup about the agency’s involvement in military training exercises and what the future holds for the innovative company.

Berenice Baker: What is the background of Amputees in Action?

"We set up the company in 2004 primarily to provide a one-stop shop for the industry. In 2005 we got invited to work with the military playing roles in training exercises."

John Pickup: We came out of the film and TV industry portraying injured soldiers in productions such Saving Private Ryan and Band of Brothers.

Some fellow actors [and I] quickly realised that there was a niche market for amputees outside of the major agencies, so we could specialise.

We set up the company in 2004 primarily to provide a one-stop shop for the industry. In 2005 we got invited to work with the military playing roles in training exercises.

With the wars in Iraq and Afghanistan, the crews needed help to do the training [and] it’s grown from there. We’ve now got nearly 300 actors on our books, plus, SFX (special effects) personnel for the role-playing side.

BB: Are many of your amputee employees ex service personnel?

JP: There is a healthy mix of military and civilian people on our books, but we’ve got a bigger proportion from normal civilian walks of life, who have lost limbs through industrial accidents and medical causes such as cancer and diabetes.

JP: We work quite a lot with the military, taking part in about five different exercises a year, with some of them spanning a ten-week period, which is quite a big timeframe.

"We’ve also been working hard on the corporate sector, such as dangerous places like oil rigs that need emergency training."

As not all our actors are ex-military, we have to train them in military protocols and maintain secrecy; we’ve got about 80 guys trained up at the moment and we’re in the process of more training.

When you get thrown into the military arena, no-one tells you that there are men running around with rifles and there are tanks and helicopters, so it can be quite a dangerous place if you don’t know what’s going on around you and you’re not made aware of all the health and safety issues.

There’s also an aspect of being trained to react appropriately to the medical treatment that’s being administered, whether correctly or incorrectly, and medical protocols they have to follow.

BB: Can you paint a picture of the sort of scenario you might detect during a military exercise?

JP: The one most people will recognise from some of the TV documentaries is a foot patrol leaving a compound and then they come under fire or one of the party steps on a mine.

[One of them] gets blown up and the troops then have to deal with the situation. They could be an hour or two’s walk from the compound and they’ve then got an injured soldier or civilian they’ve got to deal with, treat in the field and then evacuate to a safe point or extract to a main hospital.

We pick the worst possible scenario that could happen to somebody so when these kinds of accidents happen for real, they should be able to deal with it very easily.

BB: What special effects do you provide?

JP: What we do in the role-playing industry is slightly different to what they do in the film and TV industry. The medics will have to interact with the fake amputated limb. The mechanisms of the injury are different from how it works on film and the make-up looks completely different.

There are also more time constraints during an exercise than on a film set. Though it’s very realistic, we don’t make it so horrific the medics run away; we give them training as close to the real thing as possible to help them save lives.

BB: Are you looking to expand over the next five years or so?

"When you get thrown into the military arena, no-one tells you that there are men running around with rifles and there are tanks and helicopters."

JP: We’ve already got a presence in Europe and we’re looking to move into Europe and worldwide, though obviously we’re struggling with the economic climate which is a bit jittery. It’s a three-pronged approach targeting films, emergency services and the military.

We’ve also been working hard on the corporate sector, such as dangerous places like oil rigs that need emergency training, and that may grow into other things. Though everyone wants to do it on the cheap at the moment.

We are the premier amputee agency growing and expanding into new areas; we’re always looking for new business and new opportunities. Working with Serco, who are a top 100 company, has presented us with some new opportunities that may come through that relationship in the future.

Now other corporate [companies] of a similar ilk are looking at us, so this relationship will benefit Amputees in Action in the future. Obviously it’s tough in the current economic climate, but being an entrepreneur I’m sure I’ll find something.