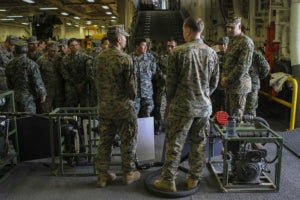 The tour consisted of multiple displays showcasing the capabilities the Marines and Sailors bring to the ship.

During the ship’s port visit, the Marines and Sailors also participated in a key leader engagement with Peruvian diplomats and military officials, as well as an evening reception held in the ship’s hangar bay.

SPMAGTF-South is currently embarked aboard America in support of her maiden transit, ‘America Visits the Americas.’