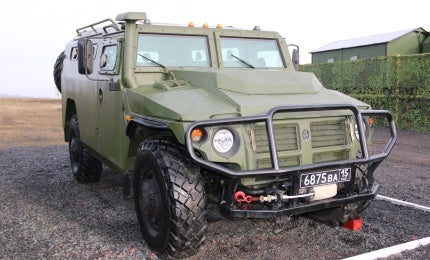 Specialised armoured vehicles for military use

VPK offers a broad range of tough, highly modified vehicles to support military operations, such as:

VPK’s existing research, industrial and material resources, and highly qualified personnel enable it to attain meet the demands of both domestic and foreign armament markets, helping clients to achieve their targets.

The company develops and supplies specialised vehicles for governmental agencies, which are subjected to rigorous, official governmental tests.

VPK has been a regular exhibitor at major international arms shows, including Eurosatory, IDEX, LAAD, DSA, MILEX, Defexpo, and MVSV.

Military vehicles for government use

VPK exports its military products via the Rosoboronexport Corporation, which is the sole Russian state intermediary agency responsible for import / export of the full range of defence and dual-use end products, technologies and services.

This process is not obligatory for non-military products, such as special armoured vehicles, although they also meet stringent standards for quality and endurance.

The company was established in 2006, as the managing company of Arzamas Machinery Plant JSC in the city of Arzamas, named Vehicle Hull Plant JSC based in Vyksa and Military Engineering Centre LLC in Nizhny Novgorod.