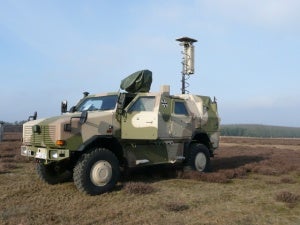 Earlier this year, the acoustic testing of the Vehicle-Mounted Loudspeaker Equipment for direct communication in theatre took place at the Bundeswehr Technical Center for Weapons and Ammunition (WTD 91) in Meppen, Germany.

After successful testing the vehicle was handed over directly to the Psychological Operations Center where it is used for the training of personnel for missions. Altogether the German PsyOps Forces have ordered 20 systems.

It is intended that the Vehicle-Mounted PSYOPS Loudspeaker Equipment (Truppe OPERATIVE INFORMATION) will be used for direct communication with target groups in areas of operation. This equipment makes it possible to inform target groups in remote areas about the situation and the intentions of their own forces while safeguarding their command and control capability and internal communication.

The equipment will be used across the entire task spectrum of all categories of the German armed forces. The use of the loudspeakers in the DINGO 2 A3, in individual and collective operation, and in remote operation in theatre should be equally possible as the use for training purposes in Germany.

Basically, the equipment consists of a long-range loudspeaker for long-distance speech reproduction (800m), an omnidirectional loudspeaker for speech and music reproduction in the close range of the vehicle as well as the associated recording and replay devices for loudspeaker announcements and microphones for use by team leaders and translators / interpreters.

Equipped is the vehicle with a GEROH 3m KVK 5 Telescopic Mast. The system has a retracted height of 1m and an extended height of 3.10m (the roof is 1.20m). The loudspeaker has a weight of more than 30kg. The system can be combat ready in less than 40 seconds.

It is possible to operate with an extended mast while traveling at a low speed. The mast serial KVK was developed for mobile use with light payloads up to 40kg. Extending and retracting of the mast is controlled by ropes, safely running inside the mast. The installed retracting mechanism allows masts to be retracted even in harsh weather conditions. It is well suited for military purposes.