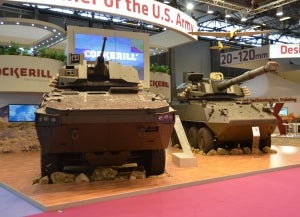 Based on an unprecedented modular concept, the Cockerill® 3000 Series is a single platform enabling a turret to accommodate guns of different calibres and the corresponding technological modules: automatic 25mm, 30mm, 30/40mm, 35mm and 50mm calibre guns, along with direct fire guns of 90mm and 105mm calibre. These systems can also fire missiles.

Thanks to their unique operational capabilities, to the rapid inter-changeability both of their crews and their arms and their high degree of common design, these modular turrets of the Cockerill® 3000 Series can cover all types of missions and objectives on the battlefield (combat tank, bunker and helicopter engagement, urban combat and intervention in combats known as asymmetric) at reduced overall operational costs.

These systems particularly benefit from the simulation solutions of CMI Defence supplied under the Agueris brand. These enable training and practice on both virtual immersive cockpits and embedded simulators.

Jean-Luc Maurange, President of CMI Defence: "With the Cockerill® 3000 Series and the innovative modular turret concept, CMI Defence stands apart from the competition. We are confirming our position of leader in the turret domain, by proposing a weapons system at the cutting edge of technology, which combines polyvalence with robustness.

"The Cockerill® 3000 Series and its high level of performance in the domain of direct firing are, in addition, already meeting with substantial success: a very high number of them are currently in the process of production in our installations in Belgium and France".

At the DSEI International Defence Exhibition, John Cockerill Defense is showcasing the 105mm variant of...

John Cockerill Fortress takes the opportunity of Expoprotection 2021 to present its range of proven...

DSEI 2021: Innovative, modular and high performance turrets in the spotlight on the John Cockerill Defense stand

John Cockerill Defense is proud to present, at DSEI 2021, and for the first time...

As part of its ongoing commitment to provide the world's armed forces with innovative solutions,...