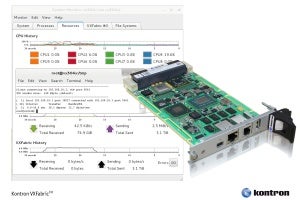 Kontron VXFabric provides the software between the PLX ExpressLane switch and the bottom of a standard TCP/IP stack, which allows the boards to use their existing TCP/IP-based application without having to be modified.

"However, the Kontron VX3042 and VX3044 SBCs put this powerful capability directly in the hands of users, allowing them to leverage PLX PCI Express switching and the ubiquitous TCP/IP socket interface. We feel this type of solution is bound to be well received in the market."

Gene Schaeffer, vice president worldwide sales, PLX, said: "PCI Express has emerged as the most sensible backplane interconnect solution available. This is demonstrated in how our switch features help achieve 5.6 gigabytes per second and efficient use of the TCP/IP stack implementation in the VPX ecosystem."

PLX switches offer the ability to combine different data types in a single converged pathway. Data (compute, communication or storage) are created and consumed as PCIe on each of the slots in the rack, delivering efficiency both in hardware architectural and software usage.

Kontron VXFabric software simplifies and accelerates application development and helps to extend application lifecycles as it enables migration to emerging hardware communication standards, such as 10G and 40G Ethernet. The software streamlines the task of inter-CPU communication in VPX system architectures.

The VX3042 and VX3044 represent Kontron’s third generation of 3U OpenVPX SBCs, both using Intel Core i7 processors and featuring native support for 10GB Ethernet and PCIe Gen3. The boards are specifically designed to provide the ideal combination of leading-edge performance in CPU computing power and I/O bandwidth.

The collaboration on the Kontron VX3042 and VX3044 Intel Core I7 SBCs draws on the expertise of two embedded-systems pioneers. PLX was first to market with PCIe Gen3 silicon and has ushered in today’s powerful PCIe-based enterprise data center and consumer platforms. The company offers a market-leading 18 PCIe Gen3 Express Lane switch devices with flexible configurations ranging from three ports and 12 lanes, and up to 24 ports with 96 lanes, all of which enable PLX to champion external PCIe applications through its ExpressFabric initiative.

Kontron is a recognised leader in the embedded-systems market segment and creates standards used industry-wide. The company introduced many of the market’s top embedded-system solutions, including the industry’s first fully functional COM Express solution.