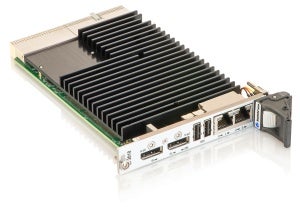 Kontron has launched its new rugged performance-per-watt champion to low-power 3U CompactPCI systems at the SPS/IPC/DRIVES trade show with its CP3010-SA CompactPCI processor board.

This makes the new board an ideal drop-in replacement even for Intel Core 2 Duo processor based CPCI systems. The most impressive feature is the three times higher graphics performance compared to previous Intel Atom processor-based designs coupled with an unbeatable thermal design power (TDP) value. The special heatsink design optimised for convection-cooled environments makes the CP3010-SA a perfect fit for all applications where fans are not desired or not possible.

The new EN50155-compliant CompactPCI processor board features soldered SoC and memory and offers high resistance against shock and vibration, making it a perfect match for harsh environments. Moreover it supports the extended temperature range from -40°C up to +85°C. Typical application areas can be found in industries such as transportation, automation, energy, military or aerospace.

By building applications based on the new Intel Atom E3800 processors-based CompactPCI board, system engineers and system integrators benefit from a highly flexible, modular system structure based on standard building blocks that can be assembled according to specific performance levels as well as extension requirements. The high standardisation level also paves the way for designing systems with a lifecycle beyond that of the components so that ultra long-term availability concepts can easily be achieved with functional and footprint identical components contributing to the high degree of investment security.

The feature set in detail

For data and software storage it provides two SATA interfaces used for an onboard CFAST socket, which can optionally be replaced by up to 64 GB soldered SATA Flash and a HDD/SSD option on the extension. The new 3U CompactPCI CPU board is now available as single slot (4HP) or dual slot (8HP) version. It comes with comprehensive board support packages for Linux, the complete Microsoft Windows range, VxWorks and QNX.