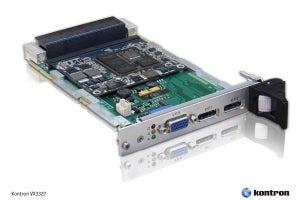 Today at the Paris Air Show, Kontron (Hall 4 – Booth A76-B76) introduced the VX3327, a new 3U VPX graphics card with AMD Embedded Radeon E6760 GPU, designed to meet the latest demands in avionics and military technology. With its 480 computing cores, Kontron’s OpenVPX-compliant board delivers a parallel data processing performance of up to 576 GFLOPs.

Size, Weight, Power and Cooling (SWAP-C) critical applications benefit from the board’s light weight construction, along with minimal power consumption of just 35 watts, plus conduction cooling – withstanding extreme temperatures of -40°C to +85°C. Additionally, the board supports real-time graphic data transmission of up to three independently controlled displays, so that users can extend their field of vision across three high-performance screens. For the new VPX graphics card, application areas are to be found predominantly in the field of High Performance Embedded Computing (HPEC).

Examples are ISR (Intelligence Surveillance, Reconnaissance) along with compute-intense situational awareness applications such as radar, sonar and video stream analysis deployed in fields in which the information superiority is heavily dependent on the progressively more precise digital processing and analysis of environmental data. The Kontron VPX graphics card VX3327 is targetted for deployment in terrestrial commando and control stations as well as in mobile land, air and naval applications including autonomous vehicles.

The Kontron 3U VPX graphics card VX3327 in detailThe Kontron OpenVPX-compliant 3U VPX graphics card VX3327 has been designed for long-term available GPGPU applications in avionics and military technology. It supports the OpenCL programming language as well as AMD’s Accelerated Parallel Processing (APP) technology for supercomputing capabilities. The AMD APP technology allows OpenCL code to be compiled into external libraries to embed highly parallel algorithms into conventional code, such as C++.

It is fitted with an AMD Embedded Radeon E6760 GPU-based MXM 3.0 module, which is connected via 8 PCI Express Gen2 lanes. The Kontron VX3327 offers a scalable architecture, which can be adapted accordingly to meet the growing demands on GPGPU. A link-data rate per lane from 1.62 GHz to 5.4 GHz is supported and fast graphic memory of 1 GB GDDR5 with 128 bits and 800 MHz are also featured. The Unified Video Decoder of the GPU supports H.264, VC-1, MPEG-2 and MPEG-4 videostream decoding and effectively unburdens the host-processor system.

The Kontron VX3327 supports up to three independent displays through one VGA interface and two DisplayPorts, available as front or rear I/Os. Up to 2560 × 1600 @ 60 Hz, 24 bpp with a 2.7 GHz link or up to 2560 × 2048 @ 60 Hz, 30 bpp with a 5.4 GHz link are further supported. With Kontron’s 3U VPX graphics card VX3327, users and product developers benefit from its efficient exploitation of system resources and its robust architecture, which is expressly designed for the environmental conditions in avionics and military. The VPX graphics card is available either in air-cooled (0°C to +55°C) one inch (5HP) or in conduction-cooled (-40°C to +85°C) 0.8 inch (4HP) variants.