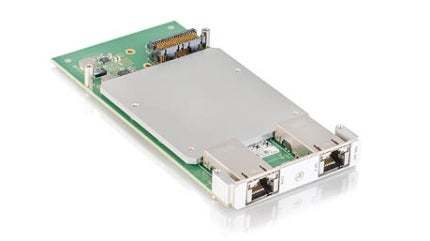 Existing infrastructures with common CAT6+ cables are sufficient to establish 10 Gigabit interconnects. With the modular approach, OEMs can significantly increase the bandwidth of existing installations by simply adding the XMC402 mezzanine card, without having to replace existing CompactPCI, VME and VPX boards.

In this way, OEMs profit from reduced costs and a faster time-to-market. The new Kontron XMC402 enables them to successfully cope with the drastically increased bandwidth of Internet-of-Things, Cloud connection, M2M and virtualization integrated in their communication, transportation, military and industrial automation applications.

The Kontron XMC402 not only delivers high transfer rates but extremely efficient data throughput too, as it unburdens the CPU by using intelligent mechanisms, such as: Checksum Offload, TCP Segmentation Offload and reduced interrupt operations.

Host boards that feature the 3rd generation Intel Core processor and integrate the PCI-Express controller in the processor, again profit from additional bandwidth and low latency: with Intel Data Direct I/O technology, the Kontron XMC402 can communicate directly with the processor cache bypassing the system memory.

This helps avoid unnecessary memory transactions so that applications profit from one to three times more bandwidth in comparison to previous generations. This frees host processor boards of I/O bottlenecks and, in the most varied application scenarios, excellent data transfer performance comparable with server-level performance can be achieved.

Another advantage is that no compromises have to be made in terms of size, weight and power (SWaP), as for the small footprint and low, average power consumption of just 7.5 watts even mobile applications usually have enough reserves.

By supporting the Intel Virtualization Technology for Connectivity (VT-c) including on-chip QoS and traffic management, flexible port partitioning as well as Virtual Machine Device Queues (VMDq), the Kontron XMC402 optimizes the bandwidth demands of even the most complex virtualization solutions for current multi-core and multi-processor installations.

And with support for Storage over Ethernet via iSCSI, FCoE and NFS it fulfils the rising need for high performance, distributed storage solutions. With backwards-compatibility to 1 Gigabit installations and the intelligent operating modus, which -depending on the connected infrastructure – automatically switches from 1GbE or 10GbE, the Kontron XMC402 additionally reduces the need for configuration while increasing reliability even in heterogeneous network environments.

The Kontron Dualport 10 Gigabit XMC402 is available now with the current Windows operating systems as well as Linux and VxWorks.