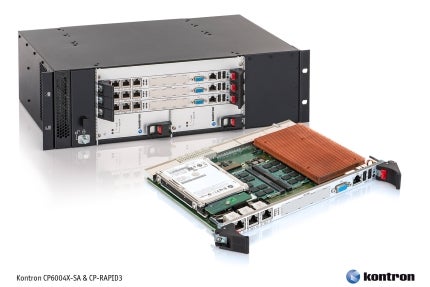 As part of its ‘High-Speed CompactPCI Initiative’, Kontron is launching the world’s first 6U CompactPCI Serial Mesh 10 Gigabit Ethernet processor board together with a compliant chassis at the Embedded World 2013 trade show (hall 1, stand 460). For the first time, a CompactPCI system supports 10 Gigabit Ethernet and PCIe over backplane in addition to the common interfaces such as PICMG 2.16, SATA and HDMI. The Kontron CompactPCI processor board CP6004X-SA is based on the latest generation Quad-Core Intel Core processor and offers high computing power and performance-per-watt, which really comes into its own in the CP-RAPID3 chassis with full-mesh fabric configuration.

Some applications for the new modular CompactPCI Serial Mesh (based on PICMG 2.20) systems are in high availability telecommunications and datacommunications systems for carriers and also with government and security companies. Applications include secure wireless systems, radar and sonar applications, and complex computational algorithms such as imaging processing. Now, even with smaller space requirements, existing system installations are provided with a significant increase in data throughput when new long-term generation systems are being developed which, in the future, could be scaled up to 40 GbE.

"With current high-performance processor technology, the need for standardized high-speed interfaces via the backplane is also growing in rugged system designs. This is why Kontron as the very first embedded manufacturer – is launching a 10 Gigabit Ethernet and PCI Express high-speed 6U CompactPCI processor board and chassis based on the PICMG 2.20 specification, which has been around for quite some time, but up to now has not been used in common system layouts," explains Norbert Hauser, Executive Vice President Marketing of Kontron AG.

"With the new high-speed CompactPCI products, Kontron is offering customers the possibility of integrating a great deal of additional performance into an existing footprint so they can meet the growing demands for modern high-end applications. Thanks to the compatibility with PICMG 2.16, upgrading existing solutions is easy and existing investments can be secured."

Multiprocessor board configurations have already been fully tested in the chassis so that pre-integrated modular CompactPCI system configurations with 10 Gigabit Ethernet and PCIe over backplane can be supplied to OEMs immediately. Customers then have the benefit of a fast time-to-market with minimum effort which, if the OEM requires, Kontron can also carry out within its accompanying integration and migration service program.

Kontron uses the ZD plus connector for enhanced signal integrity which is compatible with PICMG 2.20 but has better shielding than the standard connector. Kontron’s new high-speed CompactPCI boards and systems also offer compatibility with PICMG 2.16 and Kontron standard rear I/O specification. In this way, existing CompactPCI applications can also be equipped with the high-speed CompactPCI boards and systems with minimal effort and cost.

Feature set of the Kontron processor board CP6004x-SA

The new 6U CompactPCI processor board, Kontron CP6004X-SA, is equipped with the 3rd generation Intel Core i7 processor 3615QE with 2.3 GHz. Bandwidth-intensive applications benefit from the impressively large 6 MB cache and the extensive memory of up to 16 GB 1600 MHz DDR3 ECC SO-DIMM. With its comprehensive range of interfaces, the Kontron 6U high-speed CompactPCI CP6004X-SA processor board can be integrated into a wide variety of implementation scenarios.

Besides the two 10GbE and PCIe connections to the backplane, the board offers six SATA ports with RAID support for improved data security plus six USB 2.0 ports, two RS232, three graphic interfaces (1 x VGA 2 x DVI/HDMI) and five server class-performance Gigabit Ethernet controllers. An on-board SATA 6GB/s port can be used for a 2.5" SSD or HDD or for a 32 GB capacity Flash SATA module. In addition an XMC socket provides options for the customer’s own extensions, such as the dual-port 10 Gigabit Ethernet XMC cards from Kontron, for example.

Based on the PICMG 2.20 specification, the Kontron 6U CompactPCI chassis CP-RAPID3 features four 6U slots and can be configured with up to three PICMG 2.20 processor boards. This leaves one or two slots for GPGPU, FPGA or SSD-HDD carrier boards. The two power supply units are redundant and designed for high availability requirements. The Kontron CP-RAPID3 chassis supports 10GbE, PCI Express, SATA 6GB/s over backplane with future-proof capability of up to 40 GbE. The new chassis enables system designs with full-mesh Ethernet communication.

Product samples of the Kontron CP6004X-SA and CP-RAPID3 are available from March.