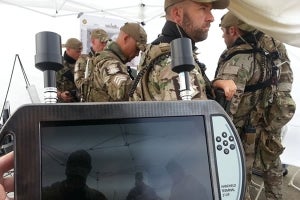 Vislink partnered with Verizon Wireless to participate in the 2015 Urban Shield tactical event in Oakland, California.

The event hosts dozens of SWAT teams from all over the world who complete multiple live-fire tactical scenarios using non-lethal rounds at several locations around the county, including the airport, reservoir, and public buildings.

Urban Shield runs for 48 straight hours from Saturday through to Monday morning.

Vislink provided two complete HEROCast™ live video systems, which were deployed at both the airport and reservoir sites. A SWAT team member was fitted with a GoPro camera and HEROCast transmitter.

The Vislink system provided the ability for on and off-site staff to view this critical and dynamic point of view video, which proved to be an invaluable asset to command staff.

During a natural disaster such as the 7.8 magnitude earthquake in Nepal on 25 April,...