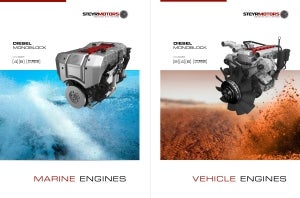 Founded in 2001 as an independent company, this year the Austrian engine manufacturer and engineering specialist STEYR MOTORS is turning 15.

However, the company remains as agile and enthusiastic as ever. After last year’s significant expansion of the Austrian headquarters, STEYR MOTORS has now refreshed its market appearance and presents itself in a new look for the jubilee year.

The modernised design conveys the innovative spirit of the company and likewise fits the new structures and facilities. The adapted corporate design was tested rather in silence during last winter at first occasions. During 2016, it will be globally implemented with a strong focus on shows and exhibitions. The new design can be experienced at the ‘boot 2016’ in January (Dusseldorf), the ‘Boot Tulln’ in March (Austria), the ‘bauma’ in April (Germany) and the ‘Eurosatory’ in June (France).

Within the last five years, STEYR MOTORS doubled its workforce due to growing demand for robust and efficient high-performance diesel and hybrid propulsion systems. The corporate growth resulted in a significant company expansion of the headquarters in Steyr, which was completed in summer 2015.

Moreover, immediately after the inauguration of the newly expanded premises, STEYR MOTORS started its next big project: establishing a new corporate design for a fresh and homogeneous market appearance. The first documents were revised until winter 2015 in order to test the new look at the first occasions. The feedback gained during the test phase was highly positive, encouraging the company to globally launch and implement the new design during the jubilee in 2016.

At the same time, STEYR MOTORS’ research and development department is also quite busy with projects. One of the current innovations in progress is a completely new version of the STEYR HDS, the unique hybrid drive system. The next generation will feature a revised hybrid and battery management along with a brand-new e-machine that gives the system a power boost to 20kW continuous electrical output while maintaining its compact design.

Furthermore, common rail versions of the proven diesel engines are announced to be in an advanced stage of development as in 2016 first prototypes will be applied in vehicle and marine field trials.

The common rail engines comply with all current emission standards while also being prepared for stricter upcoming regulations, as well as enhancing all key features of STEYR MOTORS’ products in general. For instance, the power-to-weight ratio is further improved, an even smoother operation provides more comfort and the efficiency of the engines is taken to the next level.

Considerable investments into this development guarantee the best of both worlds to come, the reliable unit injector technology known for its robustness, durability and multifuel capability combined with the efficient and smooth operation of the advanced common rail technology.

More details about current and future projects and the additions to the product portfolio will be given at the upcoming shows and exhibitions.

STEYR MOTORS originates from the former Steyr-Daimler-Puch group and was founded as an entirely independent...

The Austrian engineering specialist STEYR MOTORS is renowned for its cutting-edge solutions in the field...

After several successful projects with joint forces in the last years, the Austrian shipyard ÖSWAG...

With the approach of 2016, STEYR MOTORS launched its longstanding engineering competence as a separate...