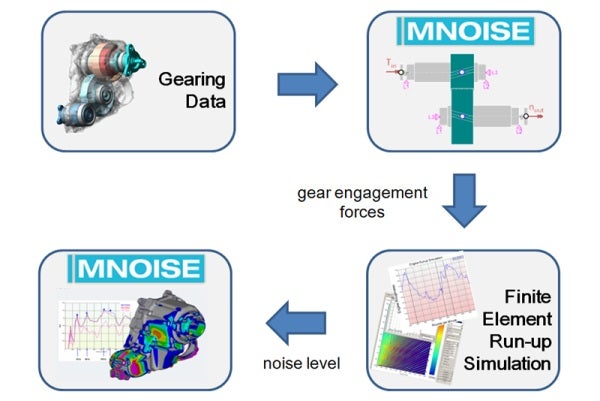 Simulation process for the assessment of the acoustic behavior of transmission units.

The contribution of transmissions to the overall noise level of a vehicle can be significant, especially when the transmission noise is not masked by other noise-emitting components (such as an internal combustion engine). The focus on minimising noise emissions over the entire drive train has made adherence to increasingly higher acoustic requirements in the design of transmissions necessary. Consequently, in an effort to make it possible to perform acoustic assessments already in the design phase, a corresponding simulation process for the virtual acoustic assessment of transmission units has been developed.

The primary cause of the acoustic emissions of transmissions under load is the varying stiffness of the toothing. Even with a constant load, parametrically-induced vibrations are caused in the transmission by the varying tooth stiffness. Geometric modifications to the toothing can have a positive influence on the acoustic behavior of a gear stage. A widespread application-related method for the correction of tooth flanks is the introduction of crowning. However, in addition to the gear stage, the transmission housing itself can represent an acoustic problem due its resonant behavior. Using computer-aided dynamic examinations, acoustic weaknesses can be identified already in early stages of development and measures for improvement can be worked out.

The acoustic properties of a transmission are very dependent on the situation regarding the contact of the individual tooth flanks. Because a numerical resolution of the physical conditions surrounding the contact of the teeth would be extremely time consuming, a simplified model approximation using a varying tooth stiffness curve is employed instead. Usually, this can be obtained directly from the software tools for the design of gear stages (e.g. KISSsoft or MDESIGN LVR). The advantage of using a tooth stiffness curve is that geometric modifications on both the macro and the micro scale through changes in tooth stiffness are incorporated in the simulation. Because the tooth stiffness values are obtained using automation, variations in the toothing can be examined effectively with respect to the acoustic behavior.

The dynamic model of a gear stage is described with 14 degrees of freedom and consists of the pair of gear wheels with shafts and stiffnesses at the bearing locations. In addition, torsional resonators are also modeled at the input and at the output. These can be used to achieve an approximate consideration of further components which are upstream and downstream from the transmission. Furthermore, speed and torque specifications can be applied to the two torsional resonators as boundary conditions. Normally, the speed runs through the entire speed range of the transmission, whereby the drive torque is maintained constant.

In the performed tests, the simulation was able to model the measurement results of the trial with outstanding quality. Thus, MNOISE Gear is now a new module in MNOISE for the efficient design of transmissions with a focus on NVH (noise – vibration – harshness). Quantitative statements in relation to the noise level to be expected require additional information (such as damping properties) and supplementary comparison simulations. Enhancements of the functionality and improvements in the simulation process are planned for the future.

ECS discusses their latest product development and innovations, and company events, in this month's newsletter.EHPS...

ECS to Exhibit at Eurosatroy 2014

Engineering Center Steyr (ECS) is pleased to announce it will be exhibiting at Eurosatory 2014,...

Magna's Plate Design at the engine test bench.Based on the Seebeck-Effect, Thermoelectric Generators (TEG) can...