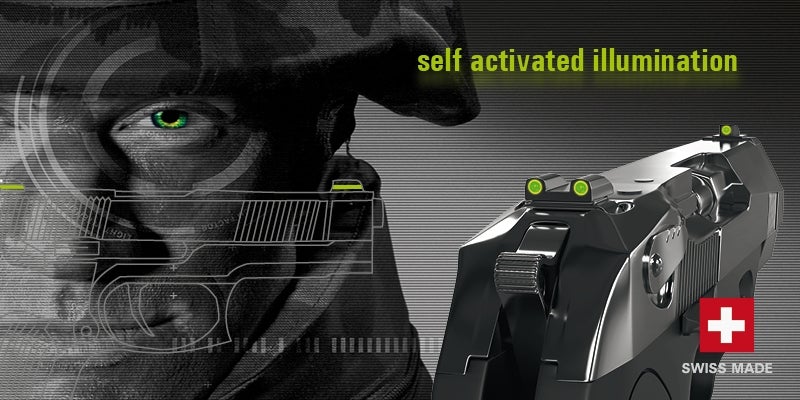 mb-microtec, situated in the village of Niederwangen on the outskirts of the Swiss capital of Berne, is a family owned company and the world’s only manufacturer, thus the market’s unchallenged leader for miniscule gaseous tritium light sources (GTLS), which are globally well known under the brand name trigalight®. The company specialises in the development testing, manufacture and supply of GTLS for use in a number of products within the civilian, military and OEM industries.

trigalight® is self-luminous. This means that it requires neither electrical current from a battery nor recharging by daylight. trigalight® also glows uninterrupted, all day and all night, it doesn’t need to be activated by pushing a button. trigalight® needs no maintenance and continues to glow for decades. The manufacturer guarantees ten years of unchangingly high-quality luminescence.

mb-microtec provides the GLTS to a large number of OEMs for use in their products, such as watches, compass, map-readers, route markers, arch markers and gun sights. The company also assists in the development and manufacture of products to customer specification.

GLTS are glass forms produced from borosilicate glass (Pyrex), which are coated internally with phosphor and then filled with tritium gas. The forms are extremely safe, hermetically sealed and not affected by water, oil or most other corrosive materials.

Electricity can be used to generate light in a number of ways. In the case of fluorescent discharge lamps, for example, electrons collide with a fluorescent layer on the inside a hollow glass body. This layer absorbs the energy released by the electrons and converts it into light. Tritium constantly emits large quantities of electrons. What we are talking about here is a beta emitter whose half-life of around 12 years and low energy make it a perfect energy source.

trigalight® products are hermetically sealed systems that fully function without the need for external light or energy sources. The tritium electrons constantly strike the fluorescent layer, whereby their energy is transformed into photons, or visible light.

Those electrons that avoid capture by the layer are absorbed by the glass. This system functions for decades with mathematically predictable consistency and is unaffected by external influences of any kind.

Due to the decay of tritium gas, trigalight® products (except watch lights) are not available on stock. Each set of lights is specifically custom made. Traditionally the tiny glass container is coated internally with a luminescent powder, then one by one filled with tritium gas and sealed.

Smaller straight lights for use as watch or gun sights illumination are produced as glass capillaries. The glass capillaries are filled manually as described above and then sliced in segments by a laser beam. Due to the laser cutting, both sealing ends of the final light are flat, not formed as a pipe as it appears with bench made lamps. Another benefit of the laser sealing process is the possibility of producing ultra small lights.

trigalight® used for instrument and watch illumination are some of the smallest self-contained lights available. The watch lights come in eight standard colours and are available in standard watch component sizes for hands and dials from 0.9mm in diameter to the world’s smallest light of 0.3mm.

All trigalight® products are completely maintenance free and are guaranteed for at least ten years.

Ongoing research and development have made it possible to fabricate trigalight® hairlight with an outer diameter of 0.3mm and a microscopically narrow interior diameter of just 0.15mm, which is approximately equal to the diameter of a human hair.

All products from mb-microtec are Swiss-made and manufactured with MIL-SPEC standards (AN SI N43.4-2005) or to customer needs. Individual tests can also be offered such as: low level temperature tests, vibration or shock tests.

mb-microtec, based near Bern, Switzerland, commenced its research and development work on unstable isotopes more than 90 years ago.

In close collaboration with the pioneers of the day in this field, among them a number of Nobel prize winners, phosphorescent self-luminous paints were developed and sold worldwide.

As an innovative Swiss company and today’s market leader, mb-microtec was granted a licence to manufacture so-called GTLS (gaseous tritium light sources) in 1968. Work was commenced immediately on further development and research into mechanised sealing of the glass bodies. The ensuing patented process made it possible to produce GTLS light sources with unprecedented precision. One of the very first laser-assisted production lines in the world was put into operation just one year later.

The result of the research is called trigalight® self-activated illumination technology.

mb-microtec will be attending AUSA 2016 between 3-5 October at the Walter E. Washington Convention Center, Washington DC.

Coming soon: trigalight will soon be able to offer you this high-quality 'safety marker' using our GTLS technology at an affordable price.

This year, mb-microtec with traser® swiss H3 watches will once again be official timekeeper at the Tour de Suisse.

By striving to sustainably improve quality, we are pleased to inform you that mb-microtec was certified in accordance with ISO 9001-2008 in April 2016.

mb-microtec is building ‘Swissness’ for you

In 2014, it was decided to realise our new premises, where additional capacity, modern workplaces, and a state-of-the-art technical environment are going to be set-up.

After years of development and process optimisation, mb-microtec is very proud to launch the new 3mm diameter tritium tube.

mb-microtec will be exhibiting at a number of shows in 2013.