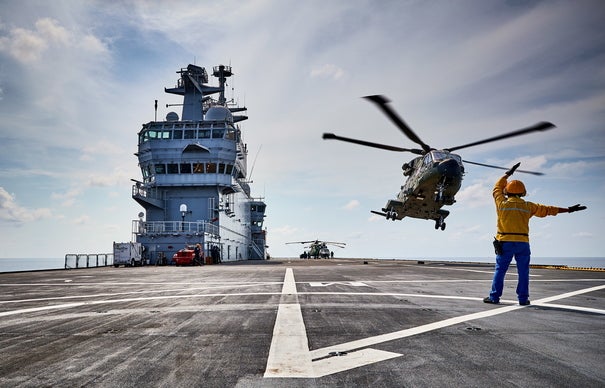 A Merlin Mk3A helicopter of 845 Naval Air Squadron (NAS) working from the flight deck of FS Mistral (French amphibious assault ship) in the Far East during Jeanne DArc 17. Two Merlin Mk3A helicopters and personnel 845 Naval Air Squadron were embarked on FS Mistral as part of the French Jeanne DArc 17 (JDA 17) task group in the Far East. 845 NAS, part of Commando Helicopter Force are based at RNAS Yeovilton, Somerset are embarked on the French Ship to provide aviation support for duration of the deployment. Around 60 Royal Navy and Royal Marines personnel exercised with their counterparts from other nations during the five-month annual French naval deployment to the Indian Ocean and Far East, including the first ever four-part maritime exercise involving France, Japan, the UK and US. The two-staged exercise named Forager Deux and Arc 17 took place in the sea and in the skies near to Japan, Guam, and Tinian, with the purpose of enhancing joint operating between the UK and international partners and deepening Defence cooperation. In addition to UK maritime personnel, the exercise also included two Royal Navy Merlin Mk3 helicopters from the UKs Commando Helicopter Force, which as part of a week-long practice assault moved 330 French, Japanese and American troops to and from Tinian.