Vitavox (a division of Secomak) has been providing military communication systems, including loudspeakers, microphones, headsets and other sound reproducing equipment to MoDs for more than 80 years and remains one of Britain’s very few true remaining defence manufacturers of the highest specification audio equipment.

It is our belief that ‘Shout before you Shoot’ should be a required doctrine and mounted as standard on all types of military vehicles in order to reduce risk, escalation of violence and collateral damage to both operational and civilian personnel. Vitavox recently signed a contract with General Dynamics UK to provide the Scout SV Vehicle Programme with the Outacom public address system, which enables the ‘Shout before you shoot’ doctrine to be used in the streets and battlefields.

Vitavox provide solutions by manufacturing products to fit a specific operational and functional requirement. Vitavox work with customers to integrate required features into the design and manufacture of the product, in addition to offering customers an off the shelf selection of products. Vitavox also provide their customers with post-purchase support making Vitavox the primary choice for applications deployed in today’s modern battlefield, in both army and navy scenarios.

The Vitavox Outacom Public Address System, as seen on the GDUK’s Scout SV programme, is a military proven, blast-proof, shock-proof and weather-proof communication system and is used with the intention of avoiding any unnecessary collateral damage and reducing the risk of unintended civilian or military casualties. The PA system tactically allows the vehicle commander and other authorised personnel, the ability to tactically interact with the public from a distance of up to 300m. The plug & play Outacom can be used as a stand-alone loud hailer system or integrated into the main intercom control unit to provide additional capabilities for existing military communications. Speech input includes a patented secure interconnectivity with the internal communications system, separate rugged microphones, flash memory, MP3 and secure radio.

Vehicle check points, IED location and indication, crowd control, building and room clearance and emergency audio communications are just some of the circumstances in which the Vitavox Outacom would be a tactically sensible option for the armed forces.

The type B90 Noryl hand-held microphone, with press-to-talk switch, is completely proofed against any shock and vibration that may be encountered during any naval or military operational environments. This microphone is watertight (except for the noise cancelling version) and may be supplied with alternative cabling and stowage solutions. The B90 microphone comes in four different versions; rocking armature, carbon inset, moving coil inset and the noise cancelling inset.

The B60 microphone is completely watertight and robustly built to withstand shock, explosion and total salt water immersion. The handset is intended for use in potentially hazardous and explosive environments due to its high quality specifications. An ATEX microphone is available with the same robust quality and waterproof capabilities.

The 2183/4 loudspeakers comply with British Standards and UK MoD specifications are and primarily used in both above and below deck environments where noise is a factor. These areas would include helicopter landing bays and near propulsion machinery. Either deployed as a loud hailer, broadcast speakers or intercom speakers, the 2183/4 models are both rugged in design and operate reliably in the harshest conditions.

These mil-spec loudspeakers are shock-proof, watertight, weather-proof (IP67), and combat-proven on both land at sea. The loudspeakers are designed to be mounted to an armoured fighting vehicle (AVF) for use as a military grade loud hailer capable of withstanding the rigours of active service.

The compact loudspeaker is designed to provide exceptional and reliable speech quality in active military environments, both on land and at sea, whilst withstanding constant vibration and sudden shock experienced in training and on active operations. The 3in rugged loudspeaker is designed for continuous speech and tone burst on aboard all land vehicles and naval vessels. The 3in 4W loudspeaker is fully watertight and shock-proof of up to 70g force in accordance with DEF-STAN 92-557. The speaker is capable of continuous operations without failure or loss of sound quality and is ideally suited for use on critical communication channels.

Vitavic 407 is rugged in design for integration with existing intercom and on board warning systems (BMS, NBC, Shot Detection), the Vitavic 407 provides clear, intelligible, controlled and reliable reproduction of all on-board signals and warnings. The Vitavic 407 is currently in operation on the UK MoD’s Foxhound Programme.

The compact broadcast loudspeaker is an external output module (EOM) used for the UKMOD Scout SV Vehicle Public Address System. The loudspeaker is available as a smaller and lighter footprint ‘plug and play’ replacement for the main broadcast speakers. This loudspeaker is suitable for use on land and at sea for vehicle and ship borne loud-hailing or broadcast applications, and is built to full EMC and environmental specification qualification to Def-Stan and MIL STD.

Vitavic 400 is a modular, true software defined (SD) fully digital intercom system. DSP and FGPA design allows for user control and manipulation in the field. The intercom system is fully upgradable and easily programmable through a standard laptop with no down time required.

The Vitavic 400 provides the optimal solution for vehicles with up to 21 crew members and six CNRs, whether in service or for the future. It is the ideal tactical and technical intercom solution for both wheeled and lighter tracked armoured vehicles. The system also supports heads up operation through the Vitavic 409 Personal Extension Unit.

The Outacom control unit is a sound amplifier module (PASAM) for the Scout SV vehicle public address system project and is used as a ‘plug and play’ with the Compact Broadcast Loudspeaker and noise cancelling microphone. Used as a direct connection for two microphones or crew headsets, with individual volume controls for all inputs and outputs. 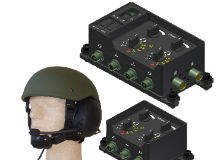 (a division of Secomak Ltd.) 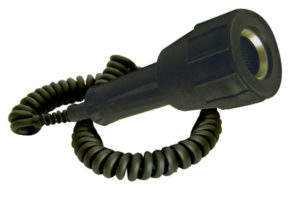 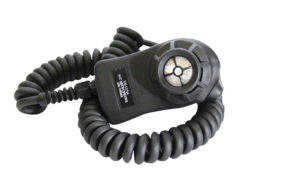 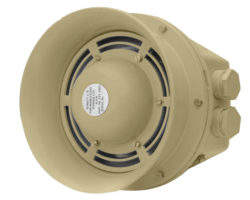 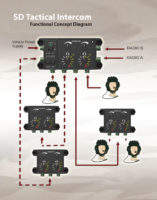 Vitavox main broadcast and Intercom loudspeakers are both current stock items for Royal Navies of UK, Australia and New Zealand.

The defence standard in service command and control.

Vitavox OUTACOM™ is a mobile, vehicle-mounted tactical public address system for use on all tracked and wheeled armoured fighting vehicles.

VITAVIC 400 is a true software-defined (SD) fully digital intercom. The SD system is a DSP & FPGA design with the end user in mind, allowing control and manipulation of functionality at user level in the field as and when needed.

A truly software-defined (SD) system, VITAVIC 400 is a fully digital, military specification intercom designed with the end user in mind. 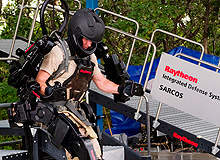 XOS 2 is a second-generation robotics suit being developed by Raytheon for the US Army. The company publicly demonstrated the capabilities of the exoskeleton. 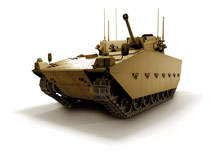 The entire Vitavox range of communications equipment - including military-standard loudspeakers, microphones and other audio equipment - will be showcased at DSEI 2013, 10-13 September.

General Dynamics UK has awarded Vitavox a contract with a potential value of £2.8m to supply the Scout Specialist Vehicle (SV) programme with a secure public address system to all MIL-STD and DEF STAN requirements.

(a division of Secomak Ltd.)