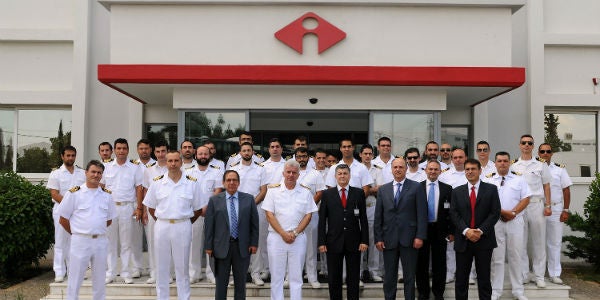 On 10 July 2013 students of the Hellenic Navy Staff & Command College (HNSCC) visited INTRACOM Defense Electronics (IDE) premises, accompanied by the HNSCC commander commodore Mr Ioannis Samaras and staff officers of the college, to learn about the manufacterer’s primary and significant domestic defense industrial activities and infrastructures. The HNSCC prepares and educates officers of the Hellenic Navy to perform staff and administrative tasks across the range of the hierarchy.

Mr George Troullinos, chief executive officer of IDE, along with the company’s high executives welcomed the students and informed them on its products and the capability of possible cooperations with the Hellenic Armed Forces. He also explained to them current partnerships with leading international defense industries, as well as the company’s participation in communications and electronic systems, multinational development and production programmes.

At the same time, the students of HNSCC were informed on the procedures and the production lines of the company, and the significant capabilities that have established IDE as an internationally-leading manufacturer of defense communications and electronic systems in Greece and the broader geographical area.