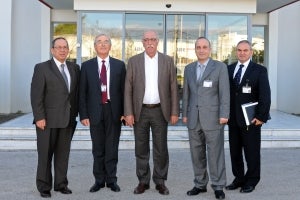 The Alternate Minister of National Defence (MoD) Mr. Dimitris Vitsas paid a visit on 8 December to the premises of IDE (INTRACOM Defense Electronics) at Koropi.

The alternate minister was welcomed by Mr. George Troullinos, CEO of IDE, and senior company executives.

During the visit, the company’s activities were presented to Mr. Vitsas, as well as R&D capabilities and programmes, while there was a detailed report on domestic support capabilities for the Armed Forces.

Furthermore, he was informed about important international collaborations with foreign companies, such as Raytheon, which contribute significantly to Greece’s export efforts.

Mr Vitsas was then shown the company’s production facilities, where a demonstration of products manufactured by the company took place.