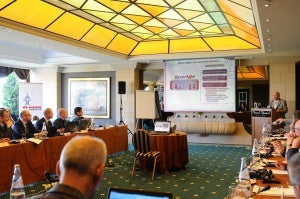 INTRACOM Defense Electronics participated in the International Conference among Nations-Users of the Leopard Main Battle Tank, following an invitation from Hellenic Army General Staff that hosted this year the event in Athens.

This event is organized annually between the seventeen (17) Nations-Users and aims at the reinforcement of combat force, addresses logistics support issues as and considers various technological upgrades and improvements related to the Leopard Main Battle Tank.

During the conference, INTRACOM Defense Electronics presented to the international audience its state-of-the-art Network Centric Wideband Communications Systems which deliver real time data and video communications, providing a force multiplier of modern vehicles in the theater of operations.

These products are the result of a multiyear Research and Development activity in Greece, they successfully overcome the current limitations imposed by conventional radio stations, and provide an integrated solution for the networking and the most effective operational exploitation of informational Battle Management Systems.