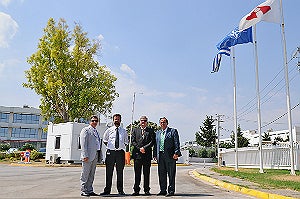 Following an international tender, INTRACOM Defense Electronics has had a contract with NSPA for the support of the PATRIOT air defence systems in Europe (Dutch, German, Greek, Spanish and US systems in Europe) since 2007, which was recently extended up to 2013 with a further option until 2016.

INTRACOM Defense Electronics possesses significant know-how and is distinguished for its technological infrastructure for the PATRIOT systems. Furthermore, the company managed to expand its cooperation with NSPA, by also undertaking significant work in the launching stations.

After his visit Mr. Manfred Eggers stated: "We are very much satisfied with the work performed by INTRACOM Defense Electronics in supporting the Patriot air defence systems. The infrastructure, the skilled personnel, the quality of the products and the performance of the company, ensure the smooth execution of the programme and NSPA can rely on INTRACOM Defense Electronics in exploring future additional European capabilities".

"For many years we have an excellent cooperation with Nato which started in the modernisation programme of the AWACS aircraft and the Evolved Sea sparrow Missile, which is now extended to include the support of the PATRIOT air defence systems.

"We are committed to deliver good products and services and we look forward to a long lasting and fruitful cooperation, which would bring more successes in the future" stated Mr. George Troullinos, CEO of INTRACOM Defense Electronics.