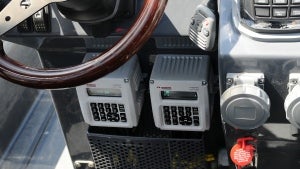 INTRACOM Defense Electronics (IDE) demonstrated successfully a land and naval surveillance system to senior executives of the armed and security forces of a third country. The demonstration included field trials on both land and sea.

Focal point of the demonstration was the wireless integrated tactical command control and communications system (WiTAC3S) of IDE, which is an integrated surveillance system consisting of a broadband communications subsystem, intercommunication, command, control and information system, image and data processing, and day and night image sensors. The demonstration confirmed the capabilities of the system for communication in joint naval and land operations and central control of the information, employing both respective versions of WiTAC3S.

WiTAC3S’ communications are based on IDE’s innovative broadband tactical communications system Spart@n, which provides a powerful and reliable infrastructure of network-centric communications with advanced capabilities to transfer real-time data and images in tactical operations, simultaneously from land and sea. WiTAC3S offers clear advantages to situation awareness during operations and operates as a force and efficiency multiplier in coast guard, special forces and surveillance operations.