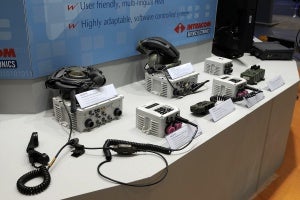 The WiSPR system has been selected, to be part of the mid-term modernization program of the self-propelled howitzers PzH2000 of the German Army. The communications upgrade program will be implemented by Krauss-Maffei Wegmann (KMW). The reference vehicle upgrade starts in 2012, and it is planned to be followed by the serial vehicle conversion program, which will total about €2.5m for WiSPR.

The system provides high quality voice communications, IP networking, as well as the capability of embedded wireless networking of voice, data and video, via the Secure Wireless Local Area Network WiSPR-WLAN. These, among other important features, provide WiSPR with significant competing advantages for a variety of military vehicles and networking applications.

Dr. George Troullinos, CEO of INTRACOM Defense Electronics, stated: "This is yet another export success of WiSPR, a system which has evolved into an established "Brand Name" with international recognition in the sector of military communications. This recent event highlights the positive outcome of our Company’s investments in the development of advanced technology systems and in parallel it enhances the prospects of future exports of INTRACOM Defense Electronics."