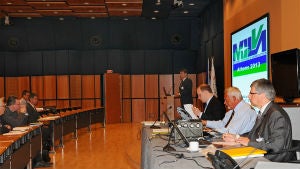 MILVA is an association of government agencies and industries promoting vehicle electronics (Vetronics) in the military environment, which publishes guidelines and standards on Vetronics’ issues. The meeting was presided by the representative of the German Federal Office of Bundeswehr Equipment, Information Technology and In-Service Support (BAAINBw-former BWB).

During the meeting, IDE presented its new command and control communications system Spart@n, followed by a live demonstration in direct link with units in the field. The demonstration featured a joint operations scenario with linking wideband communications between sea and land units to a central command.

The meeting was attended by the official delegations of defence ministries of the association’s thirteen member countries (Belgium, Czech Republic, France, Germany, Greece, Italy, Israel, Netherlands, Norway, Sweden, Turkey, the UK and the US), as well as 22 international defence industry representatives and research centres.