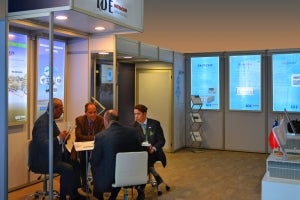 IDE’s booth was visited by the Ambassador of Greece in Chile, Ms Balta, delegations of all three branches of the Chilean Armed Forces and other foreign countries.

The executives of IDE had also meetings with other significant customers and representatives of the defence industry, who had the opportunity to be informed about the new series of hybrid electric power, energy storage and cost-saving systems (HEPS), as well as innovative products and solutions in the area of network-centric electronic systems for defence, designed by IDE for the Armed Forces for Greece and other nations.