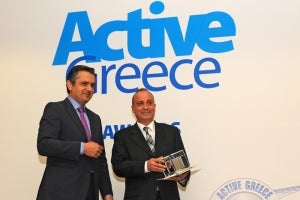 Another significant award to INTRACOM Defense Electronics (IDE). It is about ‘extroversion’, which was awarded to IDE at the ‘Active Greece Awards 2016 event, held on Wednesday 23 March 2016 at Piraeus Port Authority.

With this distinction, IDE was awarded for the high percentage of exports that exceeded 99% in recent years. It is undoubtedly a very important recognition for IDE, since these results were achieved amid adverse international economic conditions.

It is worth mentioning that the same period IDE has awarded more than 40% of the work of its signed contracts to other qualified Greek companies.

The event is one of the most important awards of Greek enterprises and was attended by Mr George Stathakis, Minister of Economy, Development and Tourism, representatives of the political opposition, business community, foreign embassies, chambers and associations as well as the media.

The award was received by Mr George Troullinos, CEO of IDE, who stated: "IDE’s award is an honour and at the same time important for the extroversion, in a period whose main characteristic is the big financial uncertainty and instability.

"This distinction rewards our strategy as a moral recognition of our employees’ work, and our commitment to quality, innovation and extroversion".