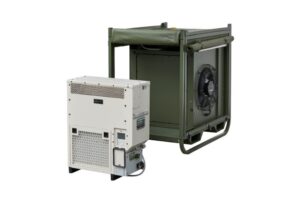 As a major milestone for the Module-R 7-B series production project, Module-R 7-B air conditioning units have successfully passed the full qualification for the German Armed Forces. The next generation of compact split tent and container HVAC provides 7kW energy efficient inverter technology cooling and 9 kW electrical heating for military shelter. The HVAC is developed and qualified for extreme operating temperatures from -32 °C up to +55 °C. Within the certification, the air conditioning unit has passed the following tests:

Vibration analysis and shock test at the German Armed Forces:

Performance and operation test according to STANAG 4370 – AECTP – 230:

After successful completed qualification, weisstechnik will start series production within the next few weeks.