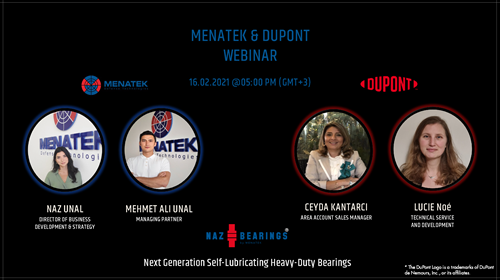 Any truly experienced observer of the armoured vehicle domain knows that the greatest innovations and the technical innovations with game-changing effect are almost invariably hidden from view – either buried in the bewildering array of electronic equipment said vehicles now carry or hidden deep inside the hull and it’s myriad systems.

With a half-century legacy of expertise and know-how in the engineering aspects of military vehicles – light and heavy – Menatek proves the truth of the above statement by collaborating with another internationally recognised name – that of E I DuPont de Nemours and Company (more immediately recognisable by the name DuPont) – in the development of the NAZ range of self-lubricating bearings.

A jointly-managed webinar held in February discussed the manner in which the two companies joined forces – and leveraged their respective knowledge bases and skillsets – to produce a range of bearings with superior technical performance, and which achieve consistent top marks in almost every measurable parameter, compared with existing, more traditionally manufactured bearings.

Building on the experience in building highly specialised components for military vehicles – such as precision torsion bars – Menatek engineers recently made a breakthrough in bearing liber technology. With an ultra-low coefficient of surface friction and micro-bearing debris systems, NAZ bearings now take their place as a flagship product in the market. Test results show that NAZ bearings exhibit extreme chemical resistance in a variety of environments and under extreme loads, including strong acids, underwater, sand, snow, jungle, salt, ice and a host of other conditions. Additional tests show the NAZ components displaying a coefficient of friction 20% lower than their direct competitors, and wear rates of less than one third. Two separate lubrication mechanisms significantly prolong bearing service life.

The combination of Menatek’s innovative approach, enabled by the superior properties of DuPont’s VESPEL polyimide material, means that the Turkish engineering specialist is able to offer a full range of high-performance bearings, with exceptional load-bearing capacity and extremely low coefficients of friction, for demanding applications such as heavily armoured vehicles, high-speed trains and urban rail vehicles, aerospace and heavy industrial requirements. Produced in both ferrous and non-ferrous alloys, according to specific customer requirements, Menatek stands ready to offer performance, efficiency and cost benefits – consistently.