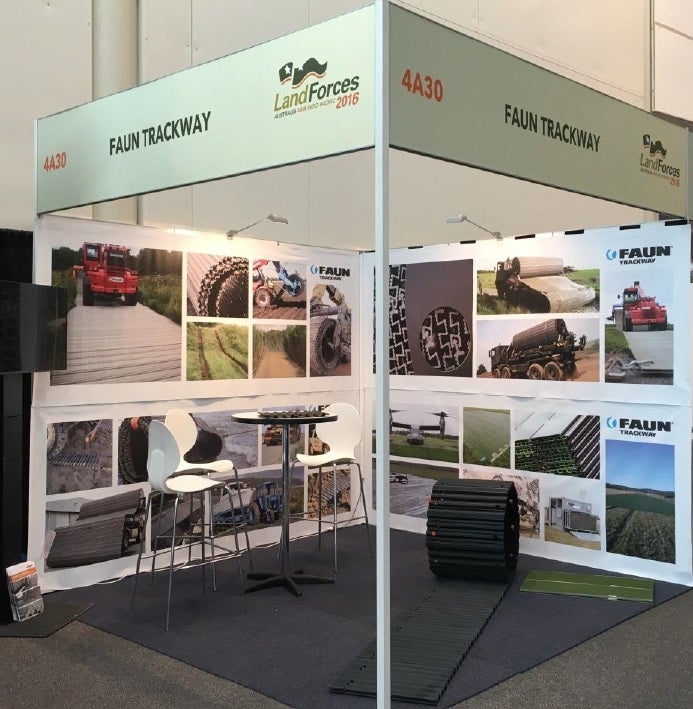 FAUN Trackway has been busy exhibiting its product capabilities this month visiting Land Forces in Adelaide, Australia, from 6-7 September and MSPO in Kielce, Poland, from 6-9 September.

The focus for the Land Forces exhibition was the display of our Vehicle Recovery May System. We were delighted to be represented by our Australian agent, Rohan James of Forward Defence, who had a number of detailed discussions on the many FAUN Trackway mobility solutions and their capabilities.

However, the main attraction was FAUN Trackway’s Vehicle Recovery Mat System, which was on display. The system assists in the recovery of bogged down vehicles, or helps gain traction on soft ground avoiding vehicle and ground surface damage.

Rohan James, agent for FAUN Trackway and MD of Forward Defence said: "Considerable interest was shown in the new Vehicle Recovery Mat System (VRM) and a number of in-depth discussions led to several delegations frequently returning to the stand to further view the VRM kit on display."

A key feature of the VRM system is that it is modular therefore the panels can be connected to create various sizes of recovery mat as required. Also, it is designed to be constantly reused as a result has a long operations life and is highly durable. VRM is easily cleaned due to the open nature of the profile, minimising retention of mud and debris and eliminating contamination issues.

MSPO comes third in Europe’s military exhibition rankings, just after Paris Air Show and DSEI London, both of which FAUN Trackway will be exhibiting at in 2017.

FAUN Trackway have a number of exhibitions remaining for 2016, including:

FAUN Trackway Limited has a prestigious reputation, with over 75 years’ experience in the design and manufacture of premium products and tailored solutions.