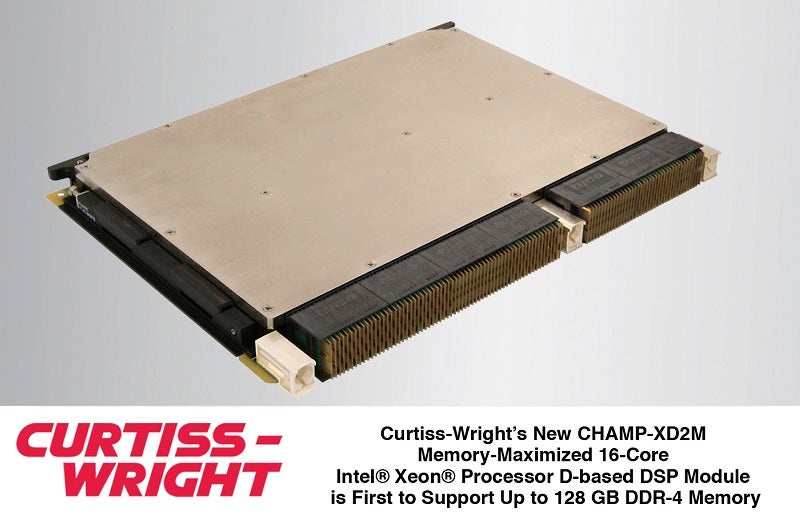 Curtiss-Wright’s Defense Solutions division today announced that it has introduced the CHAMP-XD2M, a memory-maximized derivative of its popular multicore Intel Xeon processor D-1500-based CHAMP-XD2 DSP module. The new rugged 6U OpenVPX™ board is ideal for memory-bound applications that require the maximum amount of memory per VPX slot as possible.

While the original CHAMP-XD2, with its dual Intel Xeon Processor D devices was designed specifically to address demanding compute-bound applications, the single processor CHAMP-XD2M board is uniquely able to keep up with the ‘firehose’ of incoming data from memory intensive applications such as sensor fusion. The board expands Curtiss-Wright’s supercomputer-class DSP module family with the industry’s first 16-core Xeon Processor D based COTS module to support up to 128GB of onboard DDR-4 memory, the maximum supportable by the processor. The CHAMP-XD2M also features a Xilinx® UltraScale™ Core Function FPGA.

The CHAMP-XD2M provides system designers with an ideal set of building blocks to deliver maximum compute power and system memory per VPX slot. While processing in-coming sensor data, ISR systems often shift between requiring more processing capability or more memory, depending on which stage of the processing pipeline the data resides in. The CHAMP-XD2M eliminates ISR data bottlenecks in memory-bound applications. It combines the maximum amount of memory with the highest core-count Xeon Processor D device.

The rugged module is designed for the most demanding deployed HPEC systems, to support applications such as next-generation Radar, EW and C4ISR applications and SAR, cognitive EW, and airborne cloud computing. It is ideal for use in applications that require the realtime processing of vast quantities of sensor data, such as that generated by emitters, SAR, Camera, and EO/IR imagery. The CHAMP-XD2M has already been selected for use in a sensor fusion system onboard a major High Altitude Long Endurance (HALE) unmanned aerial system (UAS).

"Our CHAMP-XD2M module, with its 128GB of memory and 16-core supercomputer processor, is the sensor fusion data turbocharger that ISR system designers have been longing for."

To ensure the protection of critical technology and data, the CHAMP-XD2M supports Curtiss-Wright’s TrustedCOTS™ hardware and software security features that enable customers to implement protection plans quickly and economically.

The single-processor CHAMP-XD2M brings the performance of independent 16-core Intel Xeon Processor D to a single 6U chassis slot. It supports either 40GbE or InfiniBand on the Data Plane in addition to its 1GbE and 10GbE interfaces on the Control Plane.

System architects for defence and aerospace platforms are tasked to not only fit all required mission electronics payloads onboard their size, weight and power (SWaP)...

Get the highest degree of motion control and stability available on the market for battle tanks, infantry fighting vehicles, and remote weapon stations from the...

Tanks and infantry fighting vehicles are often moving across very rough terrain at high speeds while engaging an enemy.

The US Navy's Space and Naval Warfare Systems Command (SPAWAR) required an IP network backbone upgrade for the AAVC-7A1, the command variant of the US...