Unigraf is a leading developer and manufacturer of electronics products for harsh environments, which are designed for use in vehicles and military command and control systems by systems integrators. The product range includes rugged computers, rugged monitors, high-resolution video capture modules and low latency network-based video signal streaming systems. Unigraf can also custom-design and manufacture products based on these technologies.

Display streaming and networking over Ethernet

UNIGRAF Network Video Streamer System is used for distributing real-time displays of situational data, navigation and perimeter surveillance cameras all over a vehicle or a combat unit at full frame rate. The low latency of the video signal transfer also enables the use of the system for remote weapon control, targeting and firing.

The system is based on the use of one or more three-channel video encoders and one or more three-channel video decoders in network configuration. Any video input channel can be directed to any video decoder output. Selectable input modules for DVI, HDMI, Composite and LVDS video are available. Data transfer is via copper or fibre optic Ethernet cable. The system also includes the possibility for remote serial control of equipment over Ethernet.

The electronics modules have been designed for harsh environments and a wide operating temperature range, thus allowing installation of the modules in outdoor environments. The encoder and decoder modules can be installed into a rugged PC or into a stand-alone enclosure.

UNIGRAF Operator Station Recorder is ideal for applications where long-term recordings of work station or command and control displays are required for archiving, debriefing, incident study or training purposes.

The Operator Station Recorder consists of a dual channel PCIe-based Recorder Card and the supporting recording software. The operator displays are recorded from the monitor video interfaces, enabling the exact display information the operator is looking at to be recorded, independent of the mix of software used and including real-time information, such as camera or radar windows displayed on the screen.

The captured display screen sequences are hardware compressed on the Recorder Card, so very few PC resources are required to store the recordings. Extended dual-screen operator displays can be recorded synchronously, which eliminates false recordings when the display contents are updated. Audio can also be recorded.

The Recorder Card has been designed for harsh environments and a wide operating temperature range.

UNIGRAF UFG series PC-based video frame grabber cards are for applications where video signal needs to be recorded or streamed. For example, they can be used to capture and record a work station, a radar, a surveillance camera or a simulator display screen.

Standard Windows video capturing applications like Media Encoder, VirtualDub or VideoLAN can be used straight after installing the card. The video capturing function can also be implemented in the customer’s application software by use of enclosed API/SDK and by using required functions according to the application need.

The frame grabber cards can also be delivered for use in harsh environments on request. The cards can be conformal coated and are tested for a wide temperature operating range.

UNIGRAF Vehicle PC is developed for harsh indoor and vehicle applications. It is a small yet powerful PC without a cooling fan, and features versatile interfaces and two-channel high-resolution graphics support. It can be installed on a wall or on the back of a rugged monitor, such as UNIGRAF UCM-700 series monitors.

The Vehicle PC is based on Intel’s newest CPU, ultra-high-resolution graphics technology, fast memories and solid state disks. This gives the unit superior performance, although power consumption is kept low. It supports most operating systems used in industrial applications.

UNIGRAF UCM-700 series monitors are rugged 15in, 19in, 21in and 23in high-resolution LCD monitors for vehicle and indoor military environments.

The monitors can be mounted into a console or to a stand. The stand can be used either on a tabletop or ceiling mounting. Full IP67 protection can be achieved with panel mounting. All accessories, such as the stand and the sunshade, have been designed and tested to meet environmental conditions.

Please use the form below to send us your business enquiry. Please note that even if our products do not directly fit to your application we may be able to make you a proposal.

Unigraf has released the product specifications of its UFG-07-HS high speed frame grabber.

UFG-07 Series is a modern, high-speed PCI express bus based frame grabber family. They enable the capture of high-definition video from any PC or HDMI/DVI or analog video output. 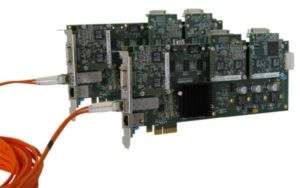 UFG-07 Series is a modern, high-speed PCI express bus based frame grabber family. They enable the capture of high-definition video from any PC or HDMI/DVI or analog video output.

Unigraf has released the product specifications of its UFG-07-HS high speed frame grabber.