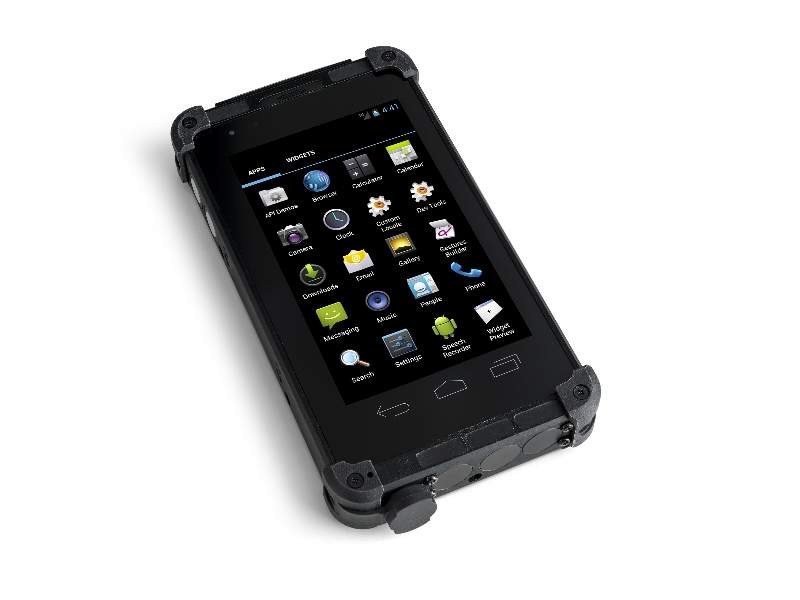 MilDef specialises in the design, development and manufacture of combat-rugged computers and special electronics that withstand the punishment of military operations and extreme environments.

The company can produce prototype units within a short time frame. As it has a global sales and support organization, Mildef can take care of customers needs, no matter the location.

There are three important factors when considering rugged mobile computers; weight, ruggedness and performance. The Rocky RS11 / RV11 series from MilDef excels in each of these areas.

Without sacrificing any of its rugged performance for military applications, the Rocky RS11/RV11 packs all the performance needed, and more. With main features such as an Intel i7-3517UE CPU, Intel HD graphics 4000, serial advanced technology attachment (SATA) III solid-state drive (SSD) and up to 8GB random access memory (RAM), the user will have all the performance required in a highly rugged package that weighs only 2.5kg in the RS11 and 3.7kg in the RV11 (depending on configurations).

Despite their low weight and size, the Rocky RS11 / RV11 are designed for extreme environments and are made to be used in the field. Both models are supplied with MIL-STD-810G and IP65 certification as standard. The RS11 comes with a 13.3in screen and the RV11 with a 15.6in screen.

The Rocky notebook series has proven to be one of the best rugged portable computer series on the market. The series is built out of separate modules, giving the opportunity for interchangeable connections and configurations and the addition of numerous accessories.

The Rocky Notebook is available in 15.1in and 17in screen sizes, both of which have no fan, meaning quiet and reliable operation.

The Panther DR/DK10 is one of the toughest computers on the market, and has a processor and graphic capacity for heavy and demanding applications.

The concept is expandable, upgradeable with a wide array of accessories and mounting options all to give customers the freedom to craft the ideal solution and that suits special and military applications.

The Panther DB7 is a fully rugged ultra-mobile PC equipped with all the technology needed in the size of a PDA. It is based on the 64-bit architecture 1.33GHz Intel Atom Dual Core E3825 Bay Trail-I CPU, up to 8GB DDR3L and up to 256GB SSD drive.

MIL-standard computers for mounting or containers

All the units are rugged, with specifications that meet several MIL standards. These rugged computers and network products are perfect for mounting in military vehicles or containers in the following configurations:

The firm can also build customised devices in accordance with a client’s requirements. This could involve anything from changing connectors or specifications on existing modules to a complete new product.

All R&D and design work is conducted in-house by Mildef engineers to ensure full control over both development and production. Customers should contact the firm with any ideas or requirements.

RD series displays are optimised for use with Rocky DP DVI for USB and remote on / off function.

Not every challenge has an off-the-shelf solution, many of the innovations forces around the world rely on today started out as customisation initiatives.

Whether it’s a few tailored products or hundreds of units, MilDef can help convert a concept for a better solution into reality with speed and efficiency. Such projects generally involve modifying computers and connectors, designing a space-saving setup and enhancing units with a huge range of accessories.

MilDef are also capable of integrating data security solutions and tempest requirements. Every new unit is tested in an EMI chamber to ensure it meets all the required standards.

The 20th century’s industrial warfare has evolved into the 21st century’s war amongst the people. Battles take place within communities, in austere, remote regions all around the world, and joint operations are more commonplace than ever before.

MilDef is proud to release the MilDef DF8A, a new end-user device (EUD) built on...

The 20th century’s industrial warfare has evolved into the 21st century’s war amongst the people. Battles take place within communities, in austere, remote regions all around the world, and joint operations are more commonplace than ever before.

Organisations are extending their networks to people, devices, vehicles, and sensors.

The MilDef Group brings together a complete range of rugged electronics expertise in one supplier. From compact computers to switches and monitors, MilDef has specialised experience in each of the key technologies needed for a powerful communications solution to perform in even the harshest conditions.

MilDef is proud to release the MilDef DF8A, a new end-user device (EUD) built on the solid foundations of the MilDef DF7A, and packing significantly more punch compared to its predecessor.

In line with the long-term plans for continued international expansion and growth, MilDef Group AB performs a series of structural and organisational changes. These changes are designed to facilitate future acquisitions, new subsidiary establishments, and to enable efficient organic growth.

MilDef continues to expand the 19.5in® product family with networking products. We have just released our new Ethernet switch series, which are small, lightweight, and fully rugged to meet the requirements of the key MIL-standards.

Located in El Monte, California, AMREL's computer division has been a long-standing key player in the rugged computers market, providing COTS, modified COTS, and customised rugged solutions to the defence, industrial and public safety sector for the past 30 years.

MilDef Group completed the acquisition of Norwegian-based company Bedriftssystemer AS on 1 July.

MilDef is proud to release a new product in the 19"/2 family.

MilDef Systems has won a competitive procurement to be delivered during the first quarter of 2015 for a monitoring and tracking system to be used on cargo and logistic units at FMV Sweden.

MilDef will be attending the 2014 Future Forces exhibition from 15 - 17 October 2014 at the PVA Expo centre in Prague, the Czech Republic.

MilDef to Showcase its Latest Products at Eurosatory 2014

MilDef will be showcasing its newest products at the 2014 Eurosatory even from 16 - 20 June in Paris, France.

MilDef continue to expand the 19in/2 product family with new and interesting products.

MilDef will be exhibiting its latest releases on the rugged market at the DSA event in Kuala Lumpur, Malaysia.

The Rocky RK and RF series are back in their latest iteration; the 10-series.

MilDef have released two new computer series in the 19in/2 product family.

MilDef is now launching the updated 10-series tablet PC's and the DF6, a new product in the handheld segment.

There are three important factors when considering rugged mobile computers: weight, ruggedness and performance - the Rocky RS11 series from MilDef excels in each area.

This year MilDef will showcase its latest notebook, the Rocky RS11, at the DSEI 2013 exhibit on 10-13 September in London, the UK.

MilDef is pleased to announce it will be exhibiting at IDET, which takes place in Czech Republic on 22-24 May.

MilDef have worked closely with a customer to develop and manufacture a complete communication system based on 19"/2 units.

The 19in/2 Computer Atom CS400 series is a rugged computer with the processing power of an Intel Atom D2550 1.86GHz processor in a compact, small 19in/2 form factor.

The Homsec exhibition will take place in Madrid, Spain, on 12th - 15th March. In our stand we will present examples of our wide range of rugged products.

MilDef has announced the release of the Panther DT6 tablet, designed to provide military personnel with a rugged, easy-to-use device for use in the field.

MilDef is proud to announce it is the first company in Sweden to sign an STI partner agreement with Cisco.

In cooperation with Meinberg, MilDef AB has developed an accurate rugged NTP time server that is resistant to shock, vibration and harsh environmental impact.

Welcome to more than 25 years of experience in ruggedized IT at Future Soldier, stand 328.

MilDef has this week launched a new website, to coincide with the Eurosatory exhibition 2012.

MilDef welcomes you to view its 25 years of experience in ruggedised IT at Eurosatory 2012, Hall 5, booth C512.

19in / 2 Computer Solutions for Danish Defence Acquisition and Logistics Organisation

The Defence & Security Equipment International (DSEi) exhibition will take place at Excel London, UK, 13-16 September. DSEi is the world's largest fully integrated defence and security exhibition. We, the MilDef Technology Group, will of course attend the exhibition and you are most welcome t

LogIn Crete, with headquarters in Helsingborg, Sweden, was founded in 1989 and since then has evolved into a well-known supplier of rugged computers and special electronics designed to operate within environments where robustness, durability and functionality are a priority, even crucial.

LogIn Crete will be displaying the current range of 19in two-rugged communications and computing equipment at the International Armoured Vehicles exhibition at the ExCel Centre on stand #220 on 07-10 February 2011.

New 19/2 Products to be Released in Quarter 3

New products within the 19/2® product range that will be released in Q3 include.

Order for the Swedish International Forces

We have received an large order for our Tablets, Notebooks and 19in/2® products to be used in international operations.

LogIn to Exhibit at EuroSatory 2010

LogIn Crete based in Helsingborg, Sweden has recently expanded its operation by nearly doubling the floor area available in order to re-house its design, development and manufacturing departments.

LogIn Crete are pleased to announce that they have re-launched their UK website.

We are pleased to inform that we have received a large order for the Nordic Battle Group 2011.

We are delighted to announce that we commence shipping of the Swedish BICES NATO Gateway this month.

Login Crete will be on Stand Number 175 (South Hall) at the DSEi exhibition from 8-11 September, Excel Exhibition Centre, London Docklands.

Login Crete AB has announced the addition of a Gigabit Ethernet Switch to the established 19"/2 range of rugged computing and communications networking products.

DM7/DI7 is one of the toughest computers available on the market with specifications that allow operation in extreme environments.

Rocky M3 is a new model, based on same technology as our Rocky M but with a larger 15in sunlight readable LCD and possibility to add military connectors.

How is activity in the aerospace, defense and security sector recovering from Covid-19’s impact?