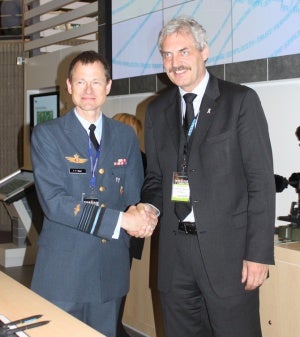 The Danish Defence Acquisition and Logistics Organization (DALO) has signed an Enterprise License Agreement with Systematic at Eurosatory in Paris to extend the licencing of SitaWare Command and Control (C2) software to an unlimited number of users.

The Danish Armed Forces have used SitaWare extensively in operations, exercises and training over the past few years. Most notably as a Blue Force Tracker in ISAF, as the prime C2 system during 2011’s large-scale Danish Division EXERCISE YELLOW KNIGHT, and at the Defence Academy and the Royal Military School. SitaWare Headquarters WebCOP has also been used by the Royal Danish Navy as part of a US coalition task force in Gulf of Aden.

Following a review of existing systems used in international operations and thorough testing of SitaWare, DALO recognise that it is now technically achievable to roll-out SitaWare force-wide. The 81 Million Danish Kroner agreement will see the SitaWare suite of software introduced across the Danish Army over the next year.

"We are really very pleased with this agreement," said Michael Holm, President and CEO of Systematic, after the signing at the Eurosatory defence exhibition in Paris.

"The Danish Armed Forces are very familiar with us and our products as we have worked very closely for many years. Our SitaWare products are the ideal choice for them to achieve coalition interoperability and situational awareness, even in the toughest of environments. We look forward to working alongside our valued customer over the coming years."

SitaWare Headquarters supports headquarters staff in planning and executing operations with a comprehensive set of tools for C2, operational planning and situational awareness. It fulfils all core requirements straight out-of-the-box and has recently attained NATO approval for use on the Afghan Mission Network.

For the frontline commander, company level down to section level, SitaWare Frontline is a Battle Management software product which communicates with SitaWare Headquarters to provide a clear operational view and rapid updates of Friendly Force locations.
By utilising the full suite of SitaWare products, Denmark will full situational awareness and C2 capabilities from the very highest level of command to those on the frontline and with coalition partners.