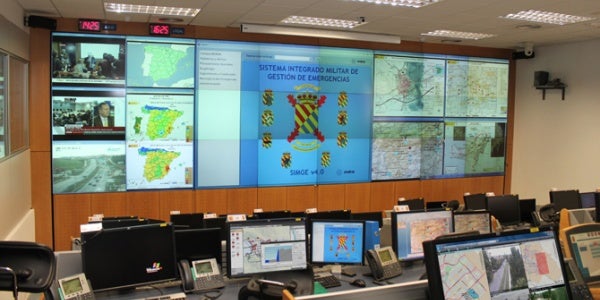 During last month’s User Forum in Madrid, Systematic delegates were given an exclusive invite to the Headquarters of Unidad Militar de Emergencias (UME), the Spanish emergency military unit.

A large number of delegates from 14 different nations were given a tour of UME Headquarters at Torrejon de Ardoz Air Base, where they were shown around the Joint Operations Centre and emergency vehicle units.

In his opening address to the User Forum, Lt General José Emilio Roldán Pascual, Commander of UME, applauded the value of Systematic’s software, saying: "A prestigious company like Systematic puts the best tools in our hands. We contribute with professionalism and enthusiasm, for achieving a good job. Modern society has thousands of soldiers, policemen and emergency organisations deployed worldwide that deserve a seamless command and control to serve their countrymen. We cannot afford to fail them."

After working extensively with UME and in-country partners, Systematics products were first deployed in spring 2009. SIMGE has been most notably used to coordinate the emergency response during the Spanish forest fires of July 2009, where 1,800 personnel battled eight huge blazes for several days, and was also deployed to Haiti in 2010 following the earthquake to assist with the rescue efforts.