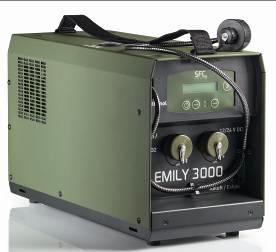 EMILY 3000 was developed based on the successful application experience with SFC Energy’s fully fielded EMILY 2200 fuel cell generator. It provides another power increase of 35% to a maximum of 125W nominal power, representing a charging capacity of approximately 3,000 watt hours per day.

EMILY 3000 implements user experience and requests, and features advanced power management for even more application flexibility. Like its predecessor, EMILY 3000 has been qualified according to Mil Std. and VG97010-2 in official military tests.

"The launch of EMILY 3000 reflects SFC Energy’s application driven development work and marks another technological milestone for our company."

In connection with SFC Energy’s popular SFC Power Manger 3G, EMILY 3000 also serves as reliable field charger for up to four batteries simultaneously. Like all SFC fuel cell generators, EMILY 3000 is silent, completely weather independent and maintenance free, providing ultimate off-grid power reliability and convenience on and off the vehicle.

In operation, it produces no harmful emissions, or detectable vibration or heat, which makes it an ideal power solution in covert and tactical power supply scenarios. Use of the fuel cell generator enables long system autonomy away from the grid in any climate or terrain.

"The launch of EMILY 3000 reflects SFC Energy’s application driven development work and marks another technological milestone for our company," said Dr. Peter Podesser, CEO of SFC Energy. "It integrates the learnings from our fielded EMILY fuel cells in a yet more convenient and more powerful model."

SFC Energy showcased the new EMILY 3000 fuel cell generator at SOFIC, which took place in Tampa, FL, US, from May 14 to 16.