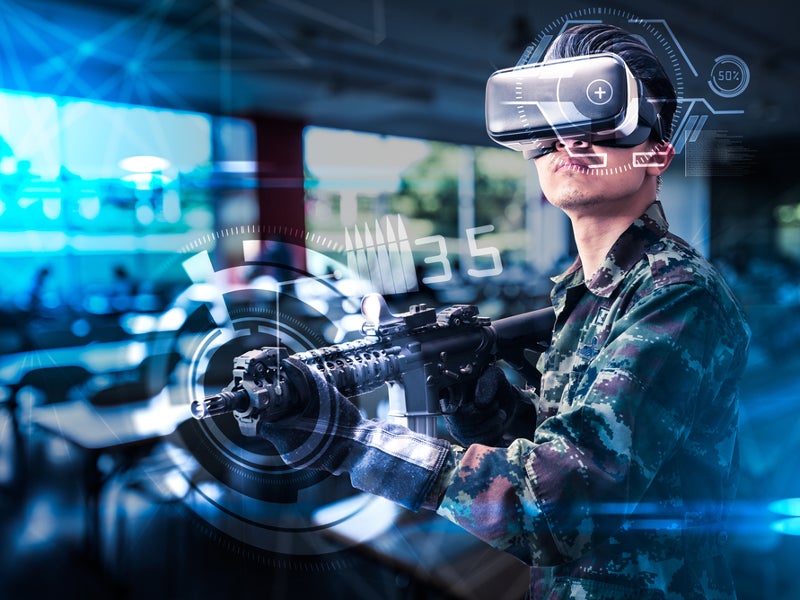 GlobalData has identified ten key technology trends that will impact the IoMT theme over the next 12 to 24 months.

Below are some of the key technology trends impacting the IoMT theme over the next 12 to 24 months, as identified by GlobalData.

AI is a key element for the optimal use of IoMT, as it allows for more efficient analysis of the vast amounts of data that flow at a high rate from an increasingly large number of edge devices.

Defence/security-related intelligence mainly comes in the form of open-source intelligence (OSINT), logistics, support and maintenance, and battlefield intelligence. With around 80% of the information available on the internet, other media sources, and social networks, analysis has relied on expert systems.

Big data analytics can scan through a larger volume of data and at the same time reduce the associated noise using AI technologies, such as machine learning. Logistics, support and maintenance hugely benefit from big data analytics.

Predictive or condition-based maintenance can reduce costs and increase the availability of platforms. Depending on the customer and their security concerns, as well as the available industrial capabilities IoMT, in conjunction with big data analytics and performance-based logistics (PBL), is a highly-promising combination for the defence industry.

Finally, battlefield intelligence IoMT is expected to maintain a human-centric or man-in-the-loop approach. Due to its nature, which involves firing against targets, especially when it comes to operations in civilian areas, human identification and clearance for firing will always be necessary. There are many ethical dilemmas that arise from this necessity, which are expected to act as barriers to the rapid expansion of IoMT in the field of armed unmanned systems. For this specific market segment, it is important for a user to invest in the quality and quantity of its sensors, so as to be able to recognise and identify targets.

AI still experiences issues related to causality. For example, machines still cannot always tell the difference between a man holding a baseball bat and a weapon, and, if it does come up with an answer, it cannot always explain why. That is an extremely important aspect especially for the security domain, where unmanned systems with AI technology, especially when operating in swarms, could eventually carry out their missions near civilians and civilian assets.

In terms of the moral dilemmas posed, people are very reluctant to have in their vicinity an unmanned system that could decide for itself what or who consists a threat, even if the accuracy rate of the algorithm is the highest possible.

Many defence contractors already offer their solutions for OSINT analysis and systems’ health monitoring, which are also available to the civilian market as well. Examples of such companies are Northrop Grumman, Lockheed Martin, Boeing, ESRI, and Palantir Technologies.

Sensor technology is evolving fast. EO/IR sensors, radar, sonars, motion or sound detectors have their capabilities augmented as the technology they incorporate improves. For example, EO/IR can see further, at much tougher climatic and atmospheric conditions, whether it is day or night, compared to just a few years ago.

Phased-array radars can multi-task, simultaneously collecting intelligence in the land, maritime or air domains without losing range coverage or accuracy. Moreover, subcomponent technology allows those sensors to be manufactured in miniature, allowing their integration in a multitude of platforms.

Therefore, developments in components technology increase the capabilities of IoMT backbones rapidly. It will also change the commercial landscape, as subsystems manufacturers will remain at the forefront of the market, closing the gap with platform manufacturers.

The sensors domain does not only include the aforementioned examples (radar, sonar, etc.). During the last few years, the defence industry has been developing highly technological sensors that are able to monitor a system’s health status. These tools do more than simply alert the operator of a platform to a malfunction. They combine sensor input and data analytics to offer predictive analytics data for failures or malfunctions long before they appear.

Spending on logistics, in the form of spare parts and life-cycle costs, will be reduced as users will be able to streamline their logistical supply chain, while at the same time increasing the availability of systems and platforms.

Considering that IoMT is based on the existence of a safe, secure, and capable network, powerful processors will remain a core component for processing big data at a fast pace. Moreover, with data being transmitted wirelessly through radio communication systems, transmitters need to be capable of transmitting larger volumes of data further and faster.

The defence industry is working on a variety of solutions aimed at tackling the technical issues related to the storage of large volumes of data. Many private companies, including Amazon, are offering storage solutions to government users, including the US DoD. However, a data storage capability for combat operations will have to comply with many technical specifications and would probably have to be separate from purely COTS solutions.

In the civilian market, IoT is becoming the next cloud battleground. Amazon, Google, Microsoft, Alibaba and IBM are vying with each other to provide the cloud infrastructure that will connect and run the world’s connected things.

Various IoT-specific cloud services have been launched to enable fast and efficient data storage and processing in the cloud, mainly on infrastructure as a service (IaaS), but also on platform as a service (PaaS) solutions. Vendors are increasingly looking to verticalise these to attract industry-specific workloads.

Security presents one of the most critical obstacles to IoT deployment. However, in providing security solutions, suppliers have had trouble going beyond their traditional domains. For example, operators’ IoT security offers have mostly been about device authentication and network reliability. Clearly, breaches can occur at the device level, network level, app-level, storage level, and data level. There is some work in progress to help vendors and operators come together.

Be the first to receive the latest news and updates from Army Technology.