Tanks have dominated battlefields for the past hundred years since being introduced in the First World War to devastating effect. Now, with autonomous vehicles seeing a flurry of development in the military arena, the tank as we know it may be on its way to become a thing of the past.

The merits of these new unmanned ground vehicles (UGVs)  are their size and affordability with the added benefit of survivability, a cocktail that militaries across the world are keen to get hold of as they face threats from increasingly unconventional foes. From Russia to Estonia, the UK and US, the potential of UGVs as both force enablers and combat vehicles is being explored with a range of systems turning the heads of commanders, among them Milrem’s TheMIS UGV, Russia’s Uran-9, BAE Systems’ robotic technology demonstrator and Textron’s robotic combat vehicle.

Coming in different sizes and configurations, these vehicles fulfil different missions and different roles; they point to a future of augmenting ground forces with unmanned systems that is seemingly just across the horizon. But will they ever be able to replace the manned vehicles that came before them?

One country interested heavily in the potential of unmanned ground vehicles is the US, with programmes underway to develop robotic combat vehicles (RCVs) and an optionally manned vehicle to replace its ageing Bradley infantry fighting vehicle.

In early January, one of these programmes took another step closer to reality with the award of contracts to build early prototypes of robotic combat vehicles, covering two variants in different weight categories. The contracts were awarded for Textron’s robotic combat vehicle, the Ripsaw M5 unveiled at last year’s AUSA 2019 conference, and to Qinetiq for a system similar to Milrem’s TheMIS.

Under the terms the contractors will build four vehicles a piece, which will undergo a company level experiment as soon as 2021. Announcing the contracts, US Army Ground Vehicle Systems Centre Director Jeffrey Langhout said: “The progress that our engineers, scientists, project managers and leaders around Team Warren and the Army Modernization Enterprise have made in moving the RCV closer to reality is truly a heartening success story for army modernisation.

“That we can get this far already is a testament to the dedication and passion of the army to giving our soldiers the best capabilities possible. This is a great day for our army, as we make another important step in learning how we can employ robotic vehicles into our future formations.”

The potential for unmanned vehicles to change the face of combat operations is huge, giving personnel more firepower while also helping to keep them out of harm’s way. As the Next Generation Combat Vehicles Cross Functional Team Director General Ross Coffman explained: “Robots have the potential to revolutionise the way we conduct ground combat operations. Whether that’s giving increased fire power to a dismounted patrol, breaching an enemy fighting position, or providing CBRNE reconnaissance, we envision these vehicles providing commanders more time and space for decisions and reducing risk to soldiers.” 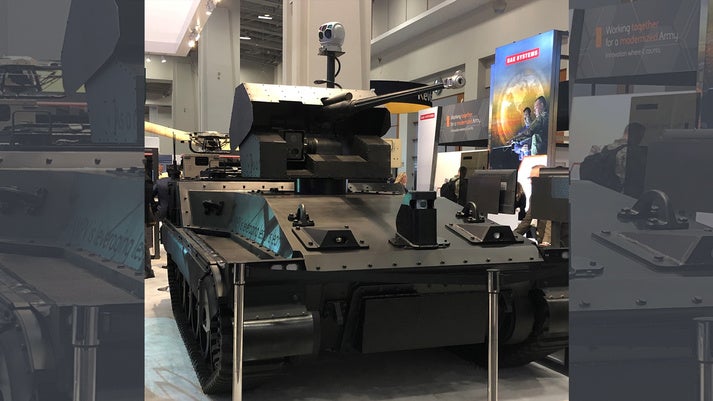 Estonia and defence contractor Milrem have been at the forefront of developing and deploying UGVs for some time, a star of the effort being the TheMIS. The small unmanned ground vehicle, which is similar to vehicles developed by Qinetiq in the UK and General Dynamics elsewhere, has already been deployed on peacekeeping operations in Mali and tested with a range of ordnance.

Milrem’s vehicle was seen at a number of stands at last year’s DSEI event, sporting a number of different remote weapons stations carrying Brimstone missiles, Stingers and conventional machine guns. It made its operational debut in October supporting Estonian peacekeepers.

Discussing the deployment and the benefits of integrating UGVs into ground forces, Estonian Army Lieutenant Madis Pärnpuu said: “Deploying an unmanned vehicle will allow units to increase their combat power, as it reduces the physical load to soldiers and allows additional supplies to be included in an operation such as heavy weaponry, additional water and ammunition that could not be transported without the vehicle.”

Although it is not a tank, the system’s ability to carry high-firepower missiles allows it to compete with larger manned systems while maintaining a small footprint for a ground force or dismounted patrol.

In Russia, the country’s armed forces have long had an interest in fielding a UGV, with the most notable example being the Uran-9 built by Kalashnikov. Russian forces in Syria have already deployed the vehicle during the civil war and another variant of the vehicle, a minesweeper known as the Uran-6, was also tested in Syria.

Russia is using the information gathered during Syrian to develop a handbook for the use of UGVs in operations.

Although a number of militaries and defence contractors are busy developing them, unmanned tanks won’t be on the cards anytime in the near future, according to Royal United Services Institute land warfare research analyst Nick Reynolds.

“I am sceptical about the future tank being unmanned any time soon,” Reynolds told us. “UGVs may be controlled remotely or they may be autonomous. If they are controlled remotely, they are reliant upon data links, which present a vector for attack – they may be hacked, or the signal may be disrupted. Alternatively, UGVs may be autonomous, but this presents its own problems – the technology must be mature enough for the vehicle to be useful.”

Reynolds also explained that the versatility of a modern main battle tank (MBT) is something a UGV would struggle to compete with. A MBT can operate independently for a long period of time, and with the right crew can swap between a number of roles from scouting to holding ground or attacking a heavily defended position. According to Reynolds, this is a high bar for an automated UGV to match.

“Humans are still far better than their robotic counterparts at performing even the most basic functions, such as navigating around obstacles, determining suitable off-road routes through rough terrain, and interpreting the surrounding environment,” he said. “Most UGVs intended for combat roles are still quite a way off from being practical.”

Commenting on the earlier mentioned projects, Reynolds explained that while impressive, they are long ways off achieving the level of automation needed; they are useful, but not quite there yet. By his estimate, the technology needed to achieve anything beyond the current crop of supervised autonomy is at least a decade away.

As technology stands at the moment, it appears more likely that we will see a teaming of manned and unmanned systems, rather than UGVs usurping MBTs on the battlefield. Many tanks now employ remote weapons systems controlled by a human crew from inside the hull; this set-up could be adapted to control a UGV remotely from the safety of a manned vehicle.

The Russian Uran-9 has been tested in Syria. Image: Vitaly V. Kuzmin.

Russia’s testing of UGVs in Syria, Reynold says, may mean the country is a step above the rest in their development

“Despite reported technical issues and limitations indicating that the Russian technology is not yet mature, this gives them an advantage in understanding how to employ UGVs effectively through having gained a large body of evidence and practical experience over several years,” he says. “So Russia may be developing a better understanding than other countries of what roles and capabilities can most usefully be fulfilled given the strengths and weaknesses of UGVs.”

For the time being it seems safe to assume that, while the development of UGVs is seeing increased attention, the vehicles are still a long way from replacing the tank.