“Ocular enhancements to imaging, sight, and situational awareness; restoration and programmed muscular control through an optogenetic bodysuit sensor web; auditory enhancement for communication and protection; and direct neural enhancement of the human brain for two-way data transfer” could all be achieved by 2050 or sooner, according to the report from the US Army’s Combat Capabilities Development Command.

The Cyborg Soldier 2050 study looks at the implications and ethics of human/machine fusion in a warfighting context, with a section of the document devoted to the reintegration of enhanced soldiers back into civilian life.

The plans paint a picture of a future warfighter not far removed from 80’s action movies like Universal Soldier with the report going as far to say: “Efforts should be undertaken to reverse negative cultural narratives of enhancement technologies.

“Across popular social and open-source media, literature, and film, the use of machines to enhance the physical condition of the human species has received a distorted and dystopian narrative in the name of entertainment.” It adds that it would be important to educate the public on human/machine fusion and be transparent about the technologies developed to assuage public concern.

Four pillars of the cyborg soldier

The report details how each of these technologies will become important in a future combat scenario starting with ocular enhancement. The report reads: “Future battlefields in 2050 are projected to be dense, urban environments or subterranean megacities that will challenge identification and tracking of targets.

“This ocular enhancement will offer small, dismounted teams the ability to acquire and share data in real-time.”

The report described “individual vision” being enhanced beyond the normal visible spectrum and the ability to for ocular enhancement to discern between targets in a high stress, busy environment. This information could then be fed back to a wider team, with the report adding: “In short, the individual possessing the ocular enhancement would provide the squadron with a portable sensory-fusion capability.”

The report explains how it is unlikely personnel would allow the removal of a healthy eye to replace it with ocular enhancements, as such, it explains the technology could be an “attractive medical option in situations where the eye tissue has been damaged or destroyed by injury or disease.” The report adds the “central and critical role that vision plays in society would likely motivate warfighters who have lost part or all of their vision to voluntarily undergo surgery that would restore or even improve their ability to see.”

The report explains: “Musculoskeletal injuries are the second leading cause of lost duty time in the US Armed Forces.” It goes on to explore how optogenetic bodysuits could be used to restore function and muscle control to areas of the body.

As personnel have to complete increasingly difficult and complicated tasks the system would allow them to do more than is currently limited by human activity. The report also explains how the bodysuit could also be programmed to control the user and allow them to complete tasks they have not been trained for.

Auditory enhancements would boost the situational awareness provided by optical enhancements while also protecting soldier’s ears from the deafening noise of combat. The report describes how the technology could filter out noises that are too loud and amplify sensitivity to low volume sounds such as footsteps. This would help soldiers with locating the origin of sounds, and possibly advanced communications capabilities.

The report added: “The current level of invasiveness suggests that this technology would only be employed by individuals with significant hearing loss.

“Direct replacement or modification of both inner and mid-ear components would be irreversible; therefore, those with acceptable current auditory capabilities would be unlikely to receive this type of enhancement”

Finally, one of the most consequential developments detailed is the possibility of directly interfacing with the human brain, which could enable personnel to communicate without talking and to directly communicate with machines. The report explains how using their brains soldiers could directly control Unmanned Aerial Vehicles (UAVs) and remote weapons systems.

The technology, called Brain-Computer Interfacing (BCI), has been a focus of military research for some time with the Defence Advanced Research Projects Agency (DARPA) this year handing out contracts for the tools research and development.

The report explains: “Our current state of technology allows remote weapon systems and unmanned vehicles to be controlled by fixed or portable workstations. Although these current systems are effective, they are hindered by the complexity of user interfaces and the limited information that can be conveyed to the user.” The US sees BCI as a means of removing the middle man and reducing reaction times by having personnel control systems directly. 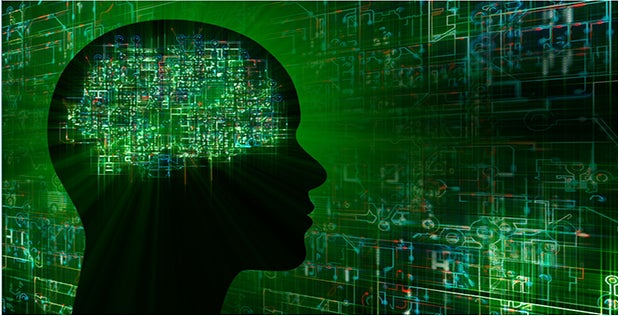 How to move forward

Moving forward into the age of the cyborg soldier, the report makes seven recommendations to the DoD to make the best use of technology that melds human and machine. These recommendations include:

The report concludes: “This study makes it clear that the benefits afforded by human/machine fusions will be significant and will have a positive impact on humans through the restoration of functionality lost due to illness or injury.

“The defence community will also realise capability opportunities that will impact military operations and training. As these technologies evolve, it is vital that the scientific and engineering communities move cautiously to maximize potential with a focus on the safety of US society.”